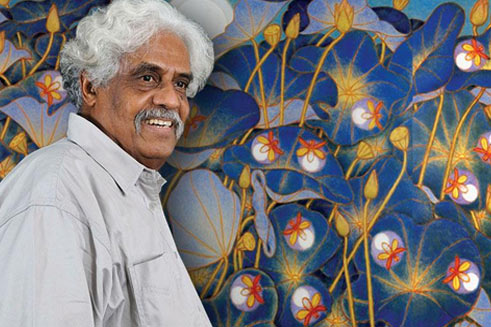 A. Ramachandran is a renowned Indian painter, born in 1935 in Attingal, Kerala. In 2005, he was awarded the Padma Bhushan, India’s third highest civilian honor, for outstanding service to the nation and in 2002, he was elected a Fellow of the Lalit Kala Akademi.

In 1957, he obtained his Master's degree in Malayalam literature, but art had remained a continuing interest since childhood. He joined Kala Bhavan, Santiniketan and completed his education in art in 1961. Between 1961 and 1964, he did his doctoral thesis on the mural paintings of Kerala. By the mid-60s, he had moved to Delhi and in 1965 he joined Jamia Milia Islamia as a lecturer in art education. Later, he became a professor in the same department and was attached to the university until his voluntary retirement in 1992. In 1991, he was appointed the honorary chairman of Kerala Lalit Kala Akademi, and in 2005 became Professor Emeritus at Jamia Millia Islamia University.

Initially, Ramachandran painted in an expressionist style which poignantly reflected the angst of urban life. The paintings were large, akin to murals, and comprised powerful figuration. By the 1980s however, Ramachandran's work underwent a sea-change. The urban reality was no longer a preoccupation. A tribal community in Rajasthan with its vibrant ethos gripped his imagination. Simultaneously, the colors and forms of the murals in the Kerala temples began to influence his mode of expression. Myths became a great resource for him. The first in this new style was ‘Yayati’, a retelling of this story from the Indian epic Mahabharata. It was conceived as the inner shrine of a Kerala temple, with thirteen bronze sculptures surrounded on three sides by painted murals, 60 by 8 feet in total size.

As a painter, his strong command over lines, colors and forms create an exciting visual drama. Ramachandran's canvases are vibrant with a sense of teeming, burgeoning life. The artist's quirky sense of irony imbues his paintings with a piquancy and feeling of new discoveries. And, as one who considered Ramkinkar Baij as his guru, Ramachandran has created sculptures which are even more intriguing in formal terms than his paintings.

In 2003, the National Gallery of Modern Art (New Delhi) organized a major retrospective of his work. A comprehensive two-volume book ‘A Ramachandran: A Retrospective’ (by Prof. Siva Kumar) documenting and analyzing his works was released simultaneously.

Ramachandran is the author of an extensive study on Kerala temple murals (‘Abode of Gods: Mural Traditions of Kerala’).

He designed the granite bas-relief sculpture at the Rajiv Gandhi Memorial at Sriperumbudur, near Chennai, Tamil Nadu, completed in 2003. It extends for 125 feet and has a height of nearly 20 feet.

Although known largely for his grand paintings and sculptures, he has written and illustrated numerous picture books for children that have been published in India, Japan, Britain, and the United States. Some of the original illustrations from these books are on permanent display at the Museum of Children’s Books at Miyazaki, Japan.

Ramachandran lives and works in New Delhi. He is married to artist Tan Yuan Chameli.