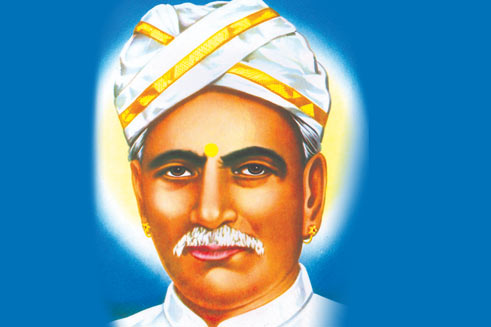 Ayyankali was born in 1863 in Venganoor, Trivandrum, Travancore. He was one of seven children born to a Pulaya (caste) family. He was illiterate as were all Dalits at that time. In those days Dalits were not allowed to walk along public roads. The Dalit women were not allowed to cover their breasts in public places. Ayyankali organized Dalits and fought against these discriminations. He was in the forefront of movements against casteism. He passed through the public roads of Venganoor on a bullock cart which was not allowed for the Dalits. Enraged by his boldness, the caste Hindus physically attacked him. Ayyankali led the movement and defeated them. Ayyankali demanded right for Dalit children to study in school, which was not granted. He started a school to teach Dalit children at Venganoor which was set ablaze by caste Hindus. In response to this, in 1907 he led a strike at Venganoor which lasted for more than a year. He called for the boycott of agricultural work raising certain demands. His demands included (a) stoppage of the practice of not giving tea in tea shops to Dalits who were given tea till then in coconut shells; (b) right to education for the Dalit children; (c) resting time for workers during work hours; and (d) replacement of the system of wages in kind by payment of cash. Initially, the [2]( Members of the Nair caste which belongs to kshatriyas in the Varna system of Hinduism]and other caste Hindus did not take it seriously. They tried many means and methods to defeat the workers. However, they realized that their families would starve to death if Ayyankalis demands were not met with. They, therefore, were forced to concede the demands of Ayyankali and his supporters. The significance of Ayyankali lies in the fact that he could spearhead a struggle for human rights of the untouchables raising demands which find expressions in various international human rights documents well before their adoption. He pioneered a movement for democratizing public places and asserting the rights of workers even before the formation of any workers organization in Kerala. The most amazing part of it is that he did all this in spite of his illiteracy. No wonder that Ayyankali was later nominated to the assembly of Travancore namely, Sri Moolam Legislative Assembly, in 1910 by the then rulers in recognition of his leadership ability. In his efforts, Ayyankali also received the support of his great contemporary Sree Narayana guru and other social reformers. By 1900 Dalits were given the freedom to walk on the public roads, and by 1914, Dalit children were allowed to join schools. Also, Dalit women were allowed to cover their nakedness in public through his efforts.

He founded the Sadhujana Paripalana Sangham (Association for the Welfare of the Poor) in 1905, which succeeded in obtaining a six-day week for agricultural laborers. Ayyankali died on June 18, 1941.