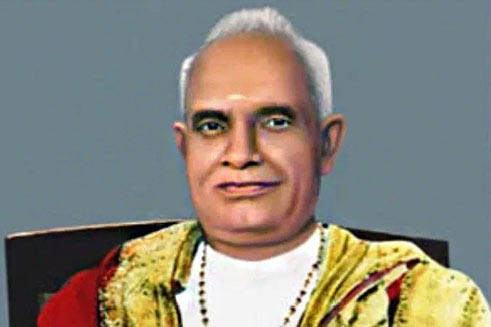 Mannathu Padmanabhan Nair (January 2, 1878 - February 25, 1970) was a social reformer and a freedom fighter from the State of Kerala, India. He is recognized as the founder of the organization called the Nair Service Society. This organization represents the Nair community which constitutes almost 14.5% of the population of the state[1]. Padmanabhan is considered as a visionary reformer who organized a 5 million Nair community under the NSS.

He was born on January 2, 1878, to Eswaran Namboothiri of Nilavana Illam and Mannathu Parvathy Amma of a respectable Nair family near Changanassery, in North Travancore.

Padmanabhan started his career as a teacher in 1893 in a Government Primary School. After a few years, he changed his profession and took up the legal practice from 1905 onwards. He started practicing law in the Magistrates Courts and soon became an established member of the Bar.

In 1924 he took part in the Vaikom and Guruvayoor temple-entry and anti-untouchability agitation. He even opened his family temple for everyone irrespective of any caste distinction.[2] He became a member of the Indian National Congress in 1947 and took part in the Travancore State Congress agitation against Sir C.P. Ramaswamy Iyer’s administration in Travancore.

In 1949 Padmanabhan became a member of the Travancore Legislative Assembly. In 1959 he led a united opposition against the State Communist Ministry. This struggle is called Vimochana Samaram which means liberation struggle he was traveled all over Kerala in the chariot pulled by Bishops, priests of different Christan factions and other prominent members of different communities. The immediate cause of the outbreak of the Vimochana Samaram was the introduction of an Education Bill by the Minister of Education Joseph Mundassery. The immediate effect of the Vimochana Samaram was the dismissal of the Communist government under E.M.S. on July 31, 1959, and the beginning of President’s rule in the state under Article 356 of the Indian Constitution. One notable feature of the movement was its massive student participation led by the student leaders like A.K. Antony, Oommen Chandy, etc.

Padmanabhan was involved with Nair Service Society as its Secretary for 31 years and as its President for 3 years. He was honored with the title ‘Bharata Kesari’ from the President of India. He also received Padma Bhushan in 1966.