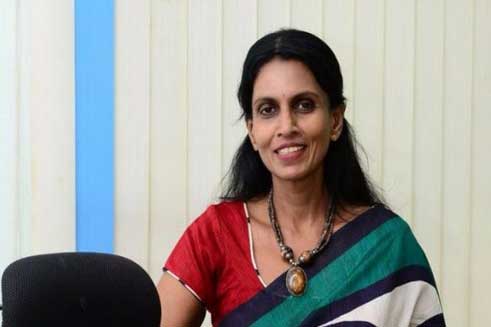 R.Sreelekha, IPS, born as the 3rd daughter of Prof.N.Velayudhan Nair and B.Radhamma on a Christmas day in 1961, did her school education in Government Model School and Cotton Hill Girls High School in Thiruvananthapuram. After completing graduation in English literature at the Women’s College, Thiruvananthapuram, she did her Masters at the University Institute of English in the Kerala University Campus.
She taught at Vidyadhiraja PG College from 1983-85, and aspiring to do something better, went into the Reserve Bank of India, as Officer Grade B in 1985. She later got through the civil service exam in 1986 and in 1987, entered the Indian Police Service to become the first lady in IPS to come to Kerala.
She worked as ASP in Cherthala & Thrissur Subdivisions, as SP in Thrissur, Alappuzha and Pathanamthitta districts, as AIG in Police Headquarters, as SP in Vigilance, Ernakulam, as SP in CBI, Kerala, as DIG in CBI, New Delhi, as DIG in Vigilance and as a DIG, Ernakulam Range. She was later promoted as Inspector General of Police on 19.08.05 and posted as the Managing Director of Kerala State Co-operative Rubber Marketing Federation Ltd. in Cochin. From 16.06.2007, she is working as MD, Roads and Bridges Development Corporation of Kerala.

Keeping her academic ambitions at par with her career goals, she went on to obtain an MBA degree in Human Resource Management from the IGNOU in 2005. She is married to Dr. Sethunath, Associate Professor in Pediatric Surgery, Alappuzha Medical College and has one son, Gokul, studying in the 10th Class.
She won the President of India’s Police Medal for Meritorious Services in January 2004. She received the Kerala State Meritorious Service Entry in 2006 for detecting a sensational murder case. She has also won the Indian Overseas Congress award for public services in January 2006. Her professional interests veer from Women’s Rights to Anti-corruption and Human Rights. Besides, she has represented India in preparing the UN draft Protocol to prevent trafficking of women in Lyon, France and Oman, Muscat in 2001-2002.

She is a writer of repute, having published four books in Malayalam so far - “Manassile Mazhavillu” (2000 March-Collection of 7 short stories-Publishers:National Book Stall);“Cherumarmarangal” (2004 June-Collection of 12 short stories-Publishers:DC/ Current books); “Niyama Samrakshanam Streekalkku” (2002 November-book on legal protection to women-Publishers:State Literacy Mission) and “Neerazhikkappuram” (2007 July-novel based on Tsunami-Publishers: DC/ Current books). In addition, she also contributes columns and articles on police-related topics as well as on general issues in various women’s magazines and periodicals. Besides, she has published a compilation of several of her articles and her first collection of English short stories.