A Prince Among Painters and A Painter Among Princes 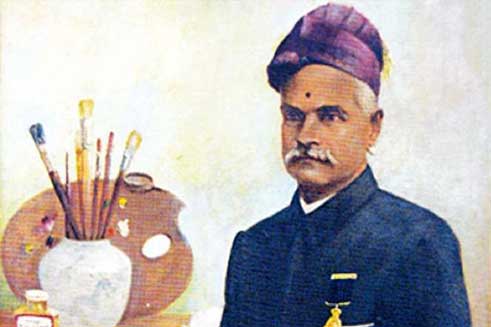 Raja Ravi Varma the prince among painters was born in the year 1848 at the royal palace in Kilimanoor, Trivandrum. Born to Umamba Thampuratti and Neelkantan Bhattathiripad, prince Ravi Varma exhibited a great inclination for painting even from a very tender age. Palace records reveal that he started painting the walls of the palace using charcoal. Awed by his immense talents his uncle Raja Raja Varma taught him the basics of painting. And at the age of 14, he was mastering the techniques of painting under the noted palace painter Rama Swamy Naidu at the Travancore palace. The child prodigy soon took to oil painting under the tutelage of the renowned British Painter Theodor Jenson. Most of his paintings reflect his close association with the Hindu Mythological figures and epic stories. In the year 1873, he was the recipient of the prestigious Madras painting exhibition contest award. He also participated in the Vienna painting exhibition in the year 1873 and won laurels that recognized him as an accomplished international painter. He breathed his last in the year 1906.