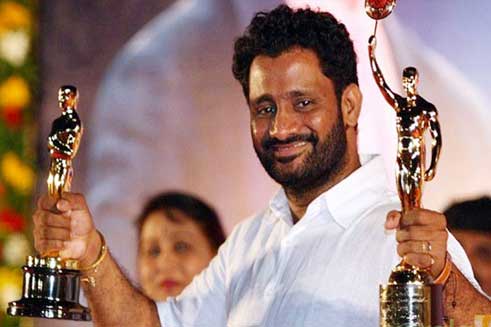 Resul Pookutty was born in a Muslim family in Vilakkupara, Anchal About 58  km from Kollam, Kerala. He was the youngest of eight children born to an impoverished family. His father was a private bus ticket checker. Pookutty had to walk 6 km to the nearest school and study in the light of a kerosene lamp as his village had no electricity. He is a 1995 graduate from Film and Television Institute of India, Pune. Pookutty moved to Mumbai after his graduation. He termed it "a natural immigration as a graduate of the institute." He pointed out that "Ninety-five percent of the technicians of the Mumbai film industry are alumni of FTII, Pune."Pookutty made his debut in sound design with the 1997 film Private Detective: Two Plus Two Plus One, directed by Rajat Kapoor. He got his big break with the critically acclaimed 2005 film Black, directed by Sanjay Leela Bhansali. He subsequently engineered sound for major productions like Musafir (2004), Zinda (2006), Traffic Signal (2007), Gandhi, My Father (2007), Saawariya (2007) and Dus Kahaniyaan (2007). In an interview in February 2008, he named Gandhi, My Father as one of his "most emotional(ly) troubled film". He said "I got emotional. I wept. I was emotionally troubled while mixing the film. There is a lot of me in the film. I tried to get a particular texture, its kind of aging in Gandhi's voice from his young to old days.

We worked on that with actors, in the mixing stages, to get a particular texture which involved a lot of multi-micro phoning and multi-track recording and effectively used that." He described working with Danny Boyle, whom he describes as one of his favorite directors for Slumdog Millionaire as a "completely new experience". He said "The format was never a concern. Let it be filmed, let it be video, let it be still camera, the sequence has to be shot. The film was demanding a particular format and not the format was decided on the film. So we shot on many kinds of film cameras, more than fifty percent in a digital camera." He expressed his disappointment on the dearth of recognition for technical work in Bollywood films in the same interview: "Everything is technical excellence, its all related to the commercial success of the film. That is very, very sad. That only happens in Hindi cinema. Whereas abroad and in Europe, it's not that. If you have a technically fine job, whether the film is a success or not, it is acknowledged by the community and the guild."

He designed sound for the 2008 blockbuster Ghajini, starring Aamir Khan and directed by Murugadoss. His first major international project Slumdog Millionaire won him an Academy award. His work on the film also won him nation-wide acclaim. During the Jaipur Literature Festival in January 2009, Amitabh Bachchan, whose blog which was allegedly against portrayal of India in Slumdog Millionaire had stirred up a controversy, went on to express his happiness in Pookuttys nomination:"The sound engineer of this wonderful movie Slumdog Millionaire, Resul, an Indian, has also won a nomination along with A.R.Rahman. I am so happy." In a press meet in Thiruvananthapuram, Pookutty revealed that he had received a call from Bachchan: "One of the first calls I received from Mumbai after the nomination was from Amitabh Bachchan who said he was proud of me being an Indian ... I told him, sir, this is a call that millions of Indians long to receive." Pookutty attributes his achievement to Malayalam films. In his own words, "sound designing and mixing were never a good production aspect in Bollywood until the film Black came. But I grew up watching films in Malayalam like Adoor Gopalakrishnan’s Elippathayam and Aravindan’s Kummatti, Pokkuveyil, and Thampu where the sublime use of sound represents the cultural context ... Devadas and Krishnanunny have done immensely truthful work in these films. My work is an extension of theirs. Their works taught me the art of blending technology with aesthetics."

This is unbelievable. We can't believe this. Ladies and gentlemen... sorry... I share the stage with two magicians, you know, who created the very ordinary sounds of Bombay, the cacophony of Bombay, into a soul-stirring, artful resonance called Slumdog Millionaire. I come from a country and a civilization that given the universal word. That word is preceded by silence, followed by more silence. That word is Om. So I dedicate this award to my country. Thank you, Academy, this is not just a sound award, this is history being handed over to me. My sincere and deepest gratitude to my teachers, Danny Boyle, Christian Colson, Paul Ritchie, Pravesh... and everybody who has contributed to this film, Glenn Freemantle and all the sound mixers. I dedicate this to you guys. Thank you, Academy. Thank you very much.