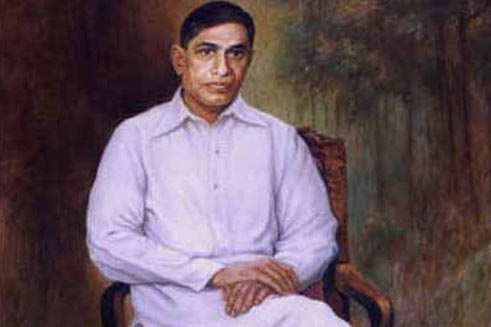 Sahodaran Ayyappan was born into a traditional Ezhava family of Cherai in Ernakulam district as the son of Kumabalathuparambil Kochavu Vaidyar and Unnuli on August 21, 1889. He lost his father at an early age and was brought up under the guidance of his elder brother Achuthan Vaidyar. After having his school education primarily in Cherai and North Paravoor, Ayyappan did his pre-university course at the Malabar Christian College, Kozhikode. He had to discontinue his further education for the time being while at Madras due to ill health.

While at Kozhikode he began speaking in public platforms stressing the need for social reforms. It was at this time that he had the opportunity to interact closely with Sree Narayana Guru at whose encouragement he decided to continue his studies and took B.A. from Maharaja’s College, Thiruvananthapuram in 1916. He also met the poet Kumaran Asan during this time. By this time the social revolutionary in Ayyappan had come of age and was ready to fight against the social evil of caste system.

Back at Cherai, in 1917, Ayyappan organized a Misra bhojanan (a grand feast of all castes sitting together under one roof). The feast was organized under the aegis of the Sahodara Sangham (The Brotherhood Association), an organization that Ayyappan himself had organized for the purpose of eradicating the evil of casteism. The feast was attended by about 200 people including the so-called untouchable Pulayas. This was opposed forcibly by conservative sections of society, including Ezhava lords. For a while thereafter, his detractors sarcastically called him Pulayan Ayyappan, a name which he took as an honor. From then on, Ayyappan came to be known as Sahodaran Ayyappan.

On May 15, 1921, Nārāyana Guru sent a message of support to Sahodara Sangham during their annual conference, supporting "inter-marriages and community feasts".

By this time he had also acquired a Law degree from the Government Law College, Trivandrum. His consuming passion was still directed towards effecting radical reforms in the society. With this aim in view, he started the journal Sahodaran from Mattancherry, containing articles and poems, which continued to be on print until 1956.

An inquisitive soul from childhood, K. Ayyappan’s mind kept probing beyond caste, religion and other dogmas. He established himself as a rationalist who didn't believe in any religion. He became the founding editor of the magazine Yukthivadi (The Rationalist) which was started in 1928. As a rejoinder to Sree Narayana Guru’s famous slogan Oru Jati, Oru Matham, Oru Daivam Manushyanu (One Caste, One Religion, One God for Human-beings), Ayyappan proclaimed his slogan of Jati Venda, Matham Venda, Daivam Venda (No Caste, No Religion, No God for Human-beings). Despite such atheism, he nevertheless had deep respect for the Guru.

Amidst his relentless work in the field of effecting social reforms, Ayyappan found time to work in trade unions and in active politics. He is one of the founding fathers of the trade unionism in Kerala. In 1928, Ayyappan was elected to Cochin Legislative Council of which he continued to be a member for the next 21 years. During his first tenure in the legislative council, Ayyappan showed his commitment to progressive programmes. On one occasion he demanded that registration is given to all love marriages.

He served as a minister two times in Cochin Legislative Assembly and one time in Thiru-Kochi Assembly.

He was appointed to the ministry by the Maharaja on September 9, 1946. He later resigned from the Cabinet, along with Panampilli Govinda Menon and C.R. Iyyunni, when Home Minister, T.K. Nair used the police force to put down labor struggles and popular agitations. In popular elections in October 1949, the Prajamandalam party secured an overwhelming majority and Ikkanda Warrior was elected leader of the party. Panampilli Govinda Menon, Sahodaran Ayyappan and C.A. Ouseph were his colleagues in the cabinet. (History of Kerala Legislature) Ayyappan was minister for a brief time in the Paravoor TK ministry, but soon resigned from active politics and concentrated his energy into social and cultural activities. At this time, his PA was A R Narayanan who too was interested in social reforms.

He was widely respected by all sections of people across the society because of his selfless social work and also on account of his impeccable personal integrity. For the last 15 years of his life, he stayed away from active social life. On March 6, 1968, Ayyappan breathed his last.