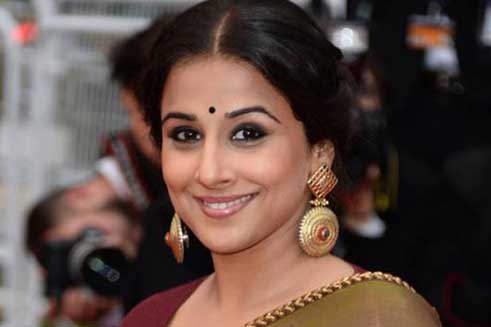 Vidya Balan, the seductive Bollywood star from Kerala, born on Jan.1,1982, began her career starring in many music videos, soap operas, and commercials, made her acting debut in the Bengali film, “Bhalo Theko” (2003), for which she won critical acclaim. She later made her Hindi film debut with “Parineeta” (2005), for which she received a Filmfare Best Female Debut Award, and received her first commercial success with Rajkumar Hiranis “Lage Raho Munna Bhai” (2006). Vidya Balan has thus established herself as one of the most promising actresses of the industry.

Vidya Balan grew up in Mumbai and attended St. Anthonys Girls High School, St. Xavier's College, Bombay and later the University of Mumbai. She graduated from college with a sociology degree.
Balans movie career started when she was signed to appear in the Malayalam film “Chakram”, alongside superstar Mohanlal but the movie was shelved. After that, she was signed for a Tamil film “Run”, but for reasons undisclosed, she was dropped after a first schedule and replaced by Meera Jasmine. In the jinx-driven industry, Vidya was dropped from her second Tamil movie "Manasellam" opposite Srikanth, on the grounds of non-performance and was replaced by Trisha Krishnan.
She then turned to television advertising. From 1998 onwards, she appeared in numerous television ads, many of which were directed by Pradeep Sarkar. She also took supporting roles in music videos, appearing with singers and bands such as Euphoria, Shubha Mudgal, and Pankaj Udhas. Vidya also portrayed the role of Radhika Mathur in a few episodes of the first season of “Hum Paanch”, but was later replaced by Amita Nangia at the end of the first season.

In 2003, she appeared in the Bengali film, Bhalo Theko, for which she won the Anandalok Puraskar Best Actress award in Kolkata. Balan next made her Hindi film debut in the critically acclaimed “Parineeta”. Though the film didn't do well, her performance was acclaimed by critics, earning her a Filmfare Best Female Debut Award and a nomination for Filmfare Best Actress Award.
After the success of her first two films, the same producer who dropped her from Manasellam was keen to sign her opposite Kamal Hassan for “Dasavatharam”. But Vidya rejected the offer and Asin Thottumkal was signed instead. In 2006, she appeared opposite Sanjay Dutt in the blockbuster film “Lage Raho Munna Bhai”. Once again her performance was well received by critics and the film went on to become the second highest grossing film of that year.
Mani Ratnams critically acclaimed “Guru” was Balans first release in 2007, in which she played a woman with a physical disability. The film did very well at the box office and her role was appreciated. Her next two releases, “Salaam-e-Ishq: A Tribute To Love” (2007) and “Eklavya: The Royal Guard” (2007) failed to do well but the latter was selected as India's official entry to the Oscars for the 80th Academy Awards. Balans last two releases of the year, “Heyy Babyy” (2007) and “Bhool Bhulaiyaa” (2007) have fared very well at the box office.

Her father, P. R. Balan, is the Vice President of ETC Channel and her mother is a homemaker. Balan also has an older sister named Priya. Vidya is reported to have stated that she is "extremely spiritual", has a "firm faith in God" and visits temples every day.