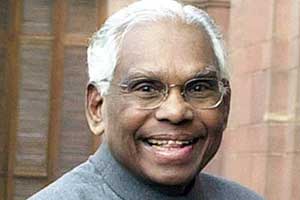 Kocheril Raman Narayanan, also known as K. R. Narayanan was the tenth President of India. He was the first Dalit, and the first Malayali, to have been President.Narayanan is regarded as an independent and assertive President who set several precedents and enlarged the scope of the highest constitutional office. He described himself as a "working President" who worked "within the four corners of the Constitution"; something midway between an "executive President" who has direct power and a "rubber-stamp President" who endorses government decisions without question or deliberation.

He used his discretionary powers as a President and deviated from convention and precedent in many situations, including - but not limited to the appointment of the Prime Minister in a hung Parliament, in dismissing a state government and imposing Presidents rule there at the suggestion of the Union Cabinet, and during the Kargil conflict. He presided over the golden jubilee celebrations of Indian independence and in the country's general election of 1998 became the first Indian President to vote when in office, setting another new precedent.

Shri Narayanan was born on October 27, 1920, in the village of Uzhavoor in Kottayam district, Kerala.

His education and Career :

Shri Narayanan received his education from the University of Travancore where he obtained an M.A. degree in English Literature standing first in the University. Later, he obtained B.Sc. (Econ.) degree from the London School of Economics with First Class Honours specializing in Political Science.

Shri Narayanan started his career as a Lecturer in the University of Travancore (1943). Later he took to journalism and worked with The Hindu, Madras (now Chennai) and Times of India, Bombay (now Mumbai - 1944-45). While a student in London, he served as the London Correspondent of "Social Welfare", a weekly from Bombay edited by Shri K.M. Munshi (1945-48).

Shri Narayanan joined the Indian Foreign Service in 1949 and served in Indian Embassies in Rangoon, Tokyo, London, Canberra, and Hanoi and held different positions in the Ministry of External Affairs. In between, he taught Economic Administration at Delhi School of Economics from 1954-55 and was also the Joint Director of the Orientation Centre for Foreign Technicians. Shri Narayanan also served as Indias Ambassador to Thailand (1967-69), Turkey (1973-75), the Peoples Republic of China (1976-78) and Secretary, Ministry of External Affairs (1976).

After retirement from the Foreign Service in 1978, Shri Narayanan was appointed as Vice-Chancellor of Jawaharlal Nehru University, New Delhi in January 1979 and held the post till October 1980. Shri Narayanan was sent as a political appointee to be Indias Ambassador to the United States of America from 1980-84. After completing his term as Indian Ambassador to the USA, Shri Narayanan entered politics and won three successive General Elections in 1984,1989 and 1991 from his Parliament Constituency of Ottapalam in Kerala. He was Member of Parliament (Lok Sabha) from 1985 to 1992. During this period he was Union Minister of State for Planning (1985), External Affairs (1985-86) and Science and Technology, Atomic Energy, Space, Electronics and Ocean Development and Vice-President, Council of Scientific and Industrial Research (1986-89).

Shri.K.R.Narayanan assumed office as President of India on July 25, 1997

Shri Narayanan has been a Member of various Indian delegations to :

(i) United Nations General Assembly (1979),
(ii) The UN Security Council in November 1985 on Namibian Independence,
(iii) Conference of Non-aligned Nations at Harare (1986) and
(iv) The Special Session of the UN General Assembly in May 1986 on the critical situation in Africa

Shri Narayanan has also served as Chairman of

The President received the World Statesman Award of The Appeal of Conscience Foundation, New York in 1998.

Shri Narayanan has delivered Convocation Addresses at several Universities in India and abroad.