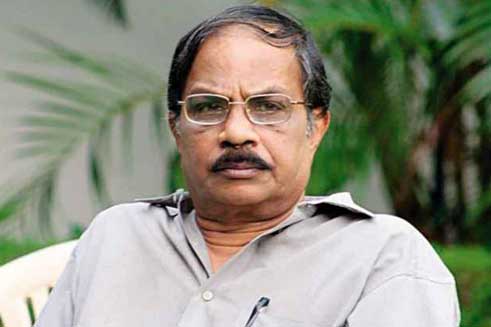 The audio version of ten short stories by M.T., who turns 73 on July 15, is to be on the air. The series begins at 9.30 p.m. on July 14 with `Sherlock.' Nine other stories will be aired on every Friday. It sure will be a treat for the fans of one of India's greatest storytellers.
The entire story will be read, by a narrator, and other voices will be used for characters other than the protagonist.

M. T. Vasudevan Nair, popularly known as MT, is a Malayalam fiction and screenplay writer and film director. He was born July 15, 1933, in Kudallur, a small village in Palakkad district, Kerala.

One of the most prolific and versatile of modern Malayalam writers, his novels, short stories, and screenplays speaks of the pain and anguish of the Kerala society in the post-independence India.

MT was awarded the highest literary award in India, the Jnanpith in 1995.

His oeuvre consists of novels, short stories, film scripts and a couple of non-fiction work on literary themes. The US Library of Congress has in its collection sixty-two books, mostly by M.T and some on him.

The Story
Nirmalyam narrates the story of a temple 'Valichappadu' (Oracle- the 'Valichappadu' is supposed to be the personification of God. He speaks on behalf of God to the gathering) and his family, passing through extreme poverty.

An ancient temple is neglected to ruins and is tended only by the Velichappadu and the man who picked flowers from the garden, Variyar. When the priest leaves the temple to start a teashop, a young man, not at all interested in the job, takes up the job of the priest. He forms a relationship with the Velichappadu's daughter. The Velichappadu's son is caught trying to sell the sacred sword and have to leave the village. When smallpox breaks out, the villagers return to the temple and organize a festival. On the festival day, the Velichappadu finds out that his daughter has been seduced by the young priest and his wife sells herself to a moneylender to feed the family. The film ends with the scene of the Velichappadu spitting on the idol of the goddess while performing the final ceremony and later killing himself by striking his head with the holy sword.

Bandhanam won the State award for best film and screenplay.

The Story:
Bandhanam is about the strong binding that holds together individuals, even while remaining invisible. The hero, distressed by his uninteresting job and his lover's attitude towards him, lives a solitary life. When his father abandons his mother and marries another woman, his feeling of alienation increases. All these make him hate his past.

When he receives his step-sister's letter informing his father's death, he once again returns to his ancestral house. All his hatred to everybody there dissolves when he meets his ailing step-mother and his loving step-sister.

The Story:
Based on his own novel of the same name, MT's Manju is about the long winter seasons of loneliness. A story set in Nainital, a tourist resort of north-east India, Manju develops around two characters, Vimala, who have nowhere to go and Buddha, who waits for his Englishman father to return to Nainital. But nobody comes. Vimala and Buddhu continue their endless waiting.

The Story:
Madhavan Kutty is in love with poetry, literature, and philosophy. But he is forced to marry a rich woman, which creates in him a feeling of imprisonment. He finds himself falling into the trap of valueless social orders. Once in his estate, an elephant falls into a pit meant for trapping wild elephants. Madhavan Kutty sees his own mirror image in the trapped elephant. He tries to save the elephant from the pit, but in vain. The elephant looks at Madhavan Kutty pitifully.

Kadavu won the State award for the best film.

The Story:
The old boatman, Beeran, meets Raju, a young boy who has run away from an unhappy home life and engages him as his assistant. Raju's attachment to the ancient boat grows as strong as Beeran's. He also invests the routine job of ferrying people across a nearly dry river with the same humane attitude that makes Beeran a butt of family jokes. Soon Raju befriends many people- the bullock cart driver who nightly drinks himself into a stupor, because his bullock stop automatically at the arrack shop on his way home; the schoolmaster who courts a working girl, but is ousted by a bridegroom chosen by the family; the hawkers and vendors who pass through the ferry; and a girl, her little brother and ailing mother who is taken to the hospital in the town and returns in a bier.

He escorts the girl and her brother to the railway tracks when they leave for Calicut to live with an uncle working in a tile factory. On his return, he discovers her silver anklet on the river bed. For days Raju broods silently, then he leaves the village for Calicut, to the disappointment of old Beeran.

In the bustling town, Raju seeks the girl in vain. Days pass as he visits tile factories, stops in front of schools and does odd jobs to survive. And then he finds her entirely by accident. Raju rushes to her home, but the girl refuses to recognize him or even acknowledge the anklet he has treasured so long. In despair and anger, he runs away and returns to the ferry one moonlit night.

A new boatman sleeps in the hut and a new boy lies outside on the ledge. Raju turns to the river. In the magical moonlight, the boat tosses on the water and moves up to him, nudging him gently. Raju curls up in it, and the boat drifts down the river and into the sea as the night passes.

The Story:
Krishna Kurupu is in his mid-seventies and his wife Ammalukutty in her mid-sixties. Their well-off children live in different cities away from them. Least bothered about the alienation created by their old age, they indulge in celebrating their old age in a honeymoon mood. Krishna Kurupu finds time to give tuition to an orphan boy apart from agriculture.

When Krishna Kurupu dies, Ammalukutty refuses to move from the house and live with their children. She believes that Krishna Kurupu is still present in and around the house.