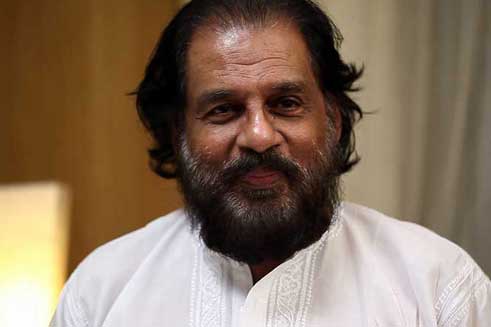 Kattassery Joseph Yesudas, one of the greatest South Indian musicians of all times, was born on January 10, 1940, in Fort Cochin, Kerala, India. His father Mr. Augustine Joseph Bagavathor, was a well known Malayalam classical musician and stage actor of his time. His mother, Mrs. Alikkutty Joseph, devoted her time and energy in bringing up her children. In his childhood, Yesudas had to face a lot of hardships because of the meager financial resources of his parents. His father could recognize the boy's musical talent at a very young age and decided to provide him with a musical education at any cost. Augustine Bhagavathor himself was his first music, Guru. The boy was taught the fundamentals of Carnatic music at the tender age of five. Indian music world soon began to witness the appearance of a new bright star on the horizon. Later several music teachers in and around Cochin gave him the valuable guidance he was seeking. It is his passion for music, hard work, and dedication that created the musical legend we call Yesudas or more intimately Dasettan.

Music came as divine grace and paternal inheritance to K.J.Yesudas, one of India's foremost exponents of classical Carnatic vocal music and leading playback singer in all-Indian languages. His classical concerts and film songs programs continue to captivate millions of listeners at home and abroad.

Shri. Narayana Guru's great message, "One caste, One Religion and One God for all Humans", influenced young Yesudas in his dealings with his fellow men. He had his own heroes among the musicians too. Mohammed Rafi, Chembai Vaydhyanatha Bhagavathor and Bala Muralikrishna are the ones he admired the most.

He has already sung more than 30,000 songs for thousands of Indian films in various languages.

In 1965, he was invited by the Soviet Government to perform music concerts in various cities of the U.S.S.R.

Yesudas is the recipient of The Kerala State Playback Singing Award 16 times since 1970.

The President of India conferred on him the coveted title of Padmashree in 1973.

Other titles and prestigious awards he has received include, `Sangeetha Raja' in 1974, `Sangeetha Chakravarthy' in 1988 and `Sangeetha Sagaram' in 1989.

He received the award for the best playback singer for the year 1988 from Tamil Nadu Government and Andhra Pradesh Government respectively. Annamalai University honored him with a Doctorate in 1989.

The Government of Kerala and `The Sangeeta Nataka Akademi' conferred the title of `Ashtanga Gayakan' - to Yesudas in 1992.

The Government of Madhya Pradesh gave the `Annual Latha Mangeshkar Award' to Sri Yesudas in 1992. Yesudas is the recipient of the 1991 National Award for the best Playback singer. This is the 6th National award that Yesudas has received.

The 1992 Tamil Nadu State Government award for the best playback singer was given to Yesudas. For his unique contribution in the field of Music, he was selected for the prestigious NATIONAL CITIZENS AWARD in 1994.

The President of India conferred on him the title of Padmashree in 1973 and he was awarded the Padma Bhushan in 2002.

Dr. Yesudas and his wife Prabha have three sons, Vinod, Vijay, and Vishal. The family is currently settled in Madras, India. The second son Vijay Yesudas is a budding musician.