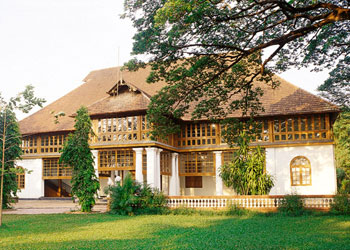 Bolgatty palace is the oldest palace the Dutch built in the vicinity of Fort Kochi. It was built in 1744 and is situated on Bolgatty island. The two-storied palace is nicely adorned and it has an ayurvedic centre and a kathakali theatre to keep a pleasant environment there. 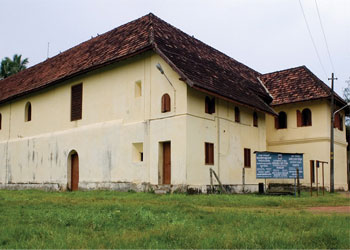 Dutch Palace
Mattancherry is a small city in Kochi area. The Dutch palace is also known as Mattancherry palace. It has mural paintings mostly dating back to 9th or 10th centuries which mainly portrays ancient Hindu mythology and legends. The palace is constructed in the traditional ‘Nalukettu’ architectural style which was prevalent in the past in Kerala. There is a temple dedicated to Pazhayannur Bhagavati, the most revered deity of Kochi royal family stands in the courtyard in the central part of the palace. The palace had been designed in a quadrangular form and has temples for Lord Siva and Lord Krishna. The palace was a gift from the Portuguese to Raja of Kochi in 1555. Even though the Raja made additions to that palace and it is generally known as Dutch palace. 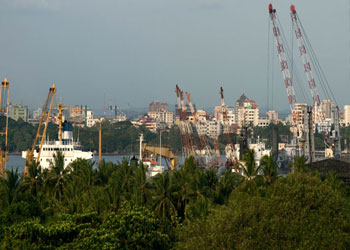 Lord Willingdon took the initiative to establish this Island. It is a man-made island and it has many business centres functioning over there. It’s the seat of the sea port and is actively involved in carrying out international trade. 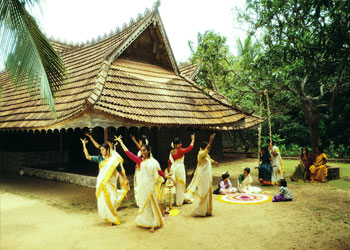 Leisure activities
Kochi Thirumala Dewaswom is an important temple of Gowda Saraswat Brahmins of Kerala. It is situated at Mattancherry. It was built during the 16th century and the Lord Venkitachalapathy is worshipped there.
There are houses constructed in Kerala style of architecture. The vedic architectural wonder extends over two millennia. One should utilise the chance of knowing our Nalukettu and Ettukettu methods of building in Fort Kochi and adjoining places.
There are many institutions in Fort Kochi which allow people to understand and recognise Ayurvedic medicine, the traditional medical practice; Kalaripayattu, an ancient martial art form of Kerala; Kathakali, an ancient dance-drama performance; delicious and palatable Kerala cuisines covering a wide variety of dishes with their genuine naturals. Many authentic and oriental spicy dishes are served in line with the needs and benefits of any age group.
The separated islands of Mulavukadu, Vallarpadam and Vypeen are linked by a bridge called as Goshree bridge and there picnic-activities like angling, slow-pacing on the sand, sun-bathing, swimming and boat-riding are readily accessible.
Onam is a grand festival which enters in the month of September every year in Fort Kochi, in order to keep our memories alive regarding the rule of a benevolent king Mahabali.
The beach at Fort Kochi is the chosen venue for New year’s day celebrations and the people take refuge and stabilise themselves in maximum merry-making on the eve of New year’s day. It’s a fascinating carnival for all irrespective of any category they belong. 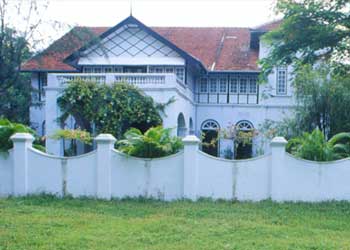 Pierce Leslie Bungalow
This charming mansion was the office of Pierce Leslie & Co, coffee merchants, founded in 1862. A representative of the Fort Cochin Colonial Bungalow, this building reflects Portuguese, Dutch and local influences.

Characteristic features are wood panels that form the ceiling of the ground floor, arched doorways, carved doors and sprawling rooms. Waterfront verandas are also an added attraction to such houses. 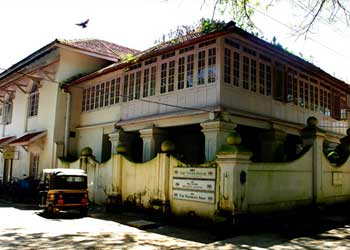 Old Harbour House
Formerly a boat house, it was built in 1808 for Carrit Moran & Co, renowned tea brokers who now use it as their residence. 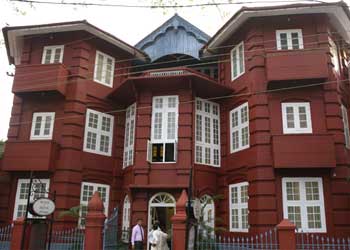 Koder House
This magnificent building constructed by Samuel S Koder of the Cochin Electric Company in 1808 is a supreme example of transition from colonial to Indo-European Architecture.

Features like veranda seats at the entrance, floor tiles set in a chess board pattern, red coloured brick like façade, carved wooden furniture and a wooden bridge connected to a separate structure across the street are unique to this bungalow.. 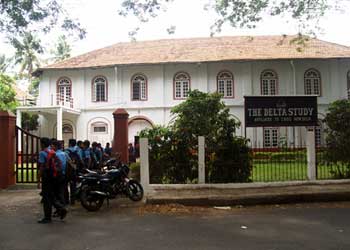 Delta Study
Once a warehouse, this heritage bungalow built in 1808 is presently a high school with the same name. 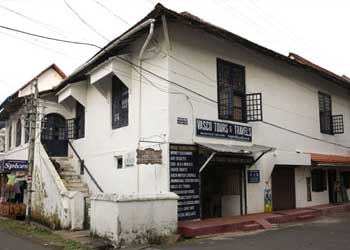 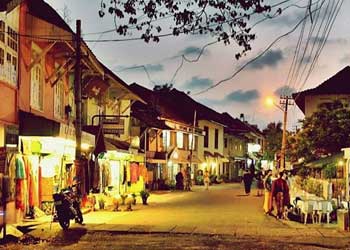 Princes Street & Loafer’s Corner
One of the earliest streets to be constructed in Fort Cochin, Princess Street with its European style residences still retains its world charm. The best view of this quaint street can be had from loafer’s corner. The traditional meeting place and hangout of the jovial locals of this area. 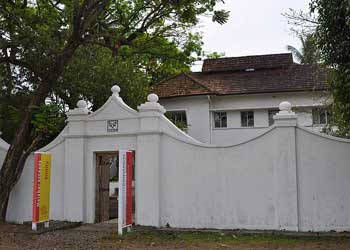 VOC Gate
The large wooden gate facing the parade ground with the monogram (VOC) of the once mighty Dutch East India Company carved on it was built in 1740. 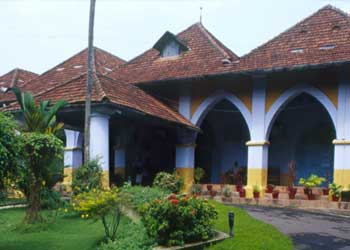 The Bishop’s House
Built in 1506 as the residence of the Portuguese Governor, the Bishop’s House stands on a little hillock near Parade Ground. The façade of the house is characterized by large Gothic Arches and has a circular garden path winding up to the main entrance. The building was acquired by Dom Jos Gomes Ferreira, the 27th Bishop of the Diocese of Cochin whose jurisdiction extended over Burma, Malaya and Ceylon in addition to India. A powerful man for his time. 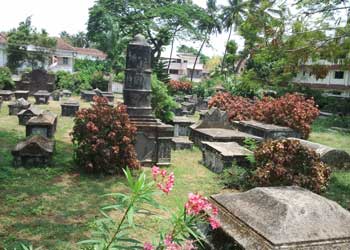 The Dutch Cemetery
The tomb stones here are the most authentic record of the hundreds of Europeans who left their homeland on a mission to expand their colonial empires and changed the course of history of this land. The cemetery was consecrated in 1724 and is today managed by the Church of South India. 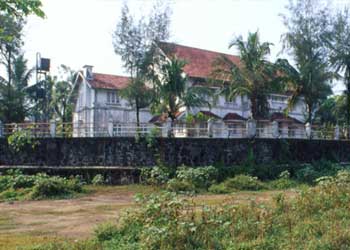 Thakur House
This graceful building holds within itself a reflection of the colonial era. The bungalow was built on the site of the Gelderland Bastion, one of the seven bastions of the old Dutch fort. Earlier known as Kunal or Hill Bungalow, it was home to the manager of the National Bank of India during the British reign. Today, the bungalow belongs to Ram Bahadur Thakur and Co, the renowned tea trading firm. 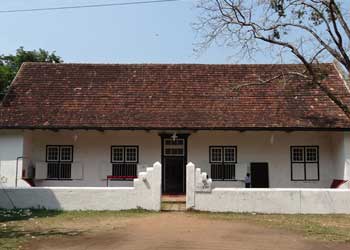 David Hall
Though built around 1695 by the Dutch East India Company, David Hall gets its name from one of its later occupants, David Koder, a Jewish businessman. It was originally associated with Hendrik Adriaan van Reed tot Drake stein, renowned Dutch commander better known for his Hortus Malavaricus, a pioneering compilation of the flora of the Malabar coast. 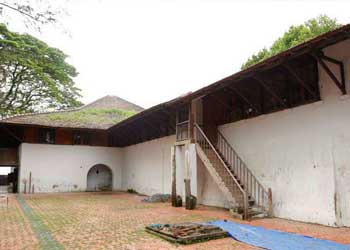 Bastion Bungalow
Built in the Indo-European style way back in 1667, the Bungalow gets its name from its location on the site of the Stromsburg Bastion of the old Dutch fort. The building blends beautifully into the circular structure of the bastion, has a tiled roof and a typical first floor veranda in wood along its front portion. Though it has been said that a network of secret tunnels runs beneath the bungalow, none have been found. Today it is the official residence of the Sub Collector.