Fort Kochi is a jewel in the crown of Kerala with its European heritage and true cosmopolitan temperament.A leisurely walk through its streets is one of the best ways to discover all that the town has to offer.A municipal town from 1866 to 1967, Fort Kochi now is one of the three main urban components that constitute the present day city of Kochi,the other two being Mattancherry and Ernakulam. In 1967, these three municipalities, along with a few adjoining areas, were amalgamated to form the new Corporation of Kochi.

Regarding the origin of its name,the most accepted theory is that the name derives from “kochaazhi” which, in Malayalam, denotes "small lagoon".Mattancherry is the nerve town of old historic cochin. The name Cochin can also be said to be derived from "co-chin", meaning "like-china". As per history records,it looked like China when the Chinese came to the region during the 14th century and erected beautiful Chinese nets. Incidentally, cherry means town in old malayalam.

Once a fishing village of no significance in the Kingdom of Kochi in pre-colonial Kerala, the territory that would be later known as Fort Kochi was granted to the Portuguese in 1503 by the Rajah of Kochi.Four hundred and forty four years of foreign control of Fort Kochi ended in 1947 with the Indian independence.A mix of old Portuguese, Dutch and British houses from these colonial periods line the streets of Fort Kochi.Perumpadappu Swaroopam,Mada Rajyam,Gosree Rajyam and Kuru Swaroopam are among the different names ascribed to the Cochin Kingdom. 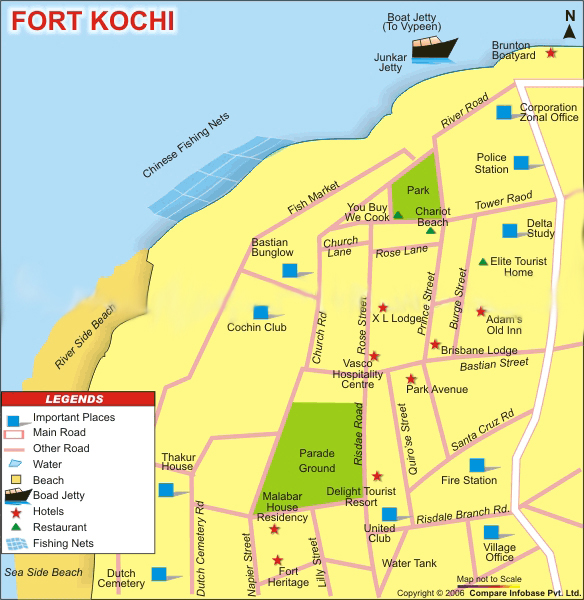