Like in most parts of India, festivals in Kerala are an integral part of the social and cultural milieu of the state. In Kerala, every community, every religion has something to celebrate about throughout the year and travellers to the state can spend an especially enjoyable vacation if they plan it during festival time. 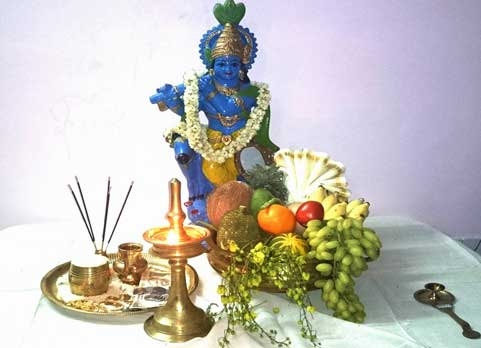 Vishu is one of the important festivals among the Hindus of Kerala. It is celebrated in the month of April each year, usually on the 14th. This year it happens to be on April 15th, 2010. According to the traditional Malayalam calendar, Vishu falls on the 1st day of the month of Medam of the New Year. In every household and in the temples of Kerala, traditional rituals are followed to usher in yet another year of health, success and good luck.

Vishu is popular both as a religious and social festival.’Vishu’ in Sanskrit means ‘equal’. The essence of Vishu festival lies in the ritual of ‘ kani kaanal ’ held in the wee hours of the day. Pictures or idols of gods and goddesses and other paraphernalia are placed on a shelf along with special yellow flowers called ‘ kani konna ’ which are seen to bloom in plenty during the spring season. As per legend, the ‘ konna poov ’ or Indian laburnum is evolved from Lord Krishna’s bracelet.

Strictly speaking, Malayalam new year starts on the first month of Chingam which comes somewhere in August. The significance of Vishu is that it marks the astrological New Year in the Malayalam calendar, and people believe it to be the auspicious day to begin their life anew and start new ventures. 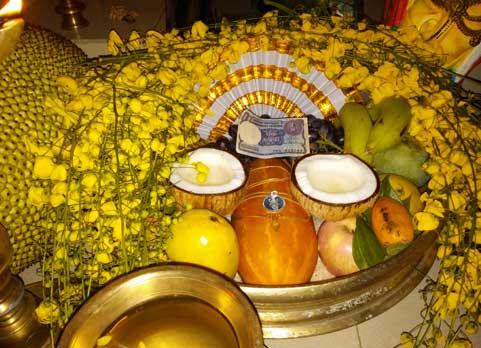 The custom of preparing the decoration referred to as ‘vishu kani’ which is set up usually in the pooja room, has been steadfastly followed for generations by the womenfolk of the house. A wide-bottomed circular dish made of bell-metal, the ‘ uruli ’ is used on the occasion, and in it are arranged a ‘thaliyola grantha’or palm-leaf manuscript, ‘ ponnu ’ or gold ornaments, ‘kodi’or new cloth arranged in a pleated pattern, flowers from the Cassia fistula or Konna tree, some coins in a silver cup, a mirror, a split coconut, a cucumber, ripe mangoes, bananas and a jack-fruit.

The mirror is placed in the center of the dish while on either side are kept two burning lamps, and a mat is placed in front of the whole decoration. As dawn breaks, the family members are lead blindfolded by the seniormost woman in the household and made to sit on the mat one by one so that when they open their eyes they are able to view the divine decoration facing them and absorb the yellow aura of sanctity and splendor spread before them. They are also supposed to look into the mirror and see their own faces in it, as a gesture of heralding good fortune. Malayalees consider this ritual as the most auspicious beginning to their activities and ventures all through the year.

Following decoration of the ‘ kani ’on the eve of ‘ vishu pulari ’, the lady of the house, usually the grandmother, mother or the eldest sister, makes it a point to sleep near the ‘kani’, with a matchbox close at hand. She gets up before sunrise, much earlier than the rest of the members. Keeping her eyes closed, she lights up the lamps and with prayers on her lips, she opens her eyes to behold the golden scene that unfolds before her. The idea behind ‘kani kaanal’ is to ensure a virtuous beginning in life by seeing and imbibing divinity before leading a mundane life.

On the day people visit nearby temples with their families and offer worship early in the morning. People wear ‘ kodi pudava ’ or new clothes on the occasion and the elders among the family distribute tokens of gift money called ‘ vishu kaineettam ’ to the younger members, children, maids, etc. Special poojas and prayers are held in public places all over and people wish and greet one another on the joyous occasion.

Children wait eagerly for this ritual. The elders of the family starting with the grandparents give away the ‘ kaineettam ’ or gift of money to the younger ones. It consists of coins or rupee notes presented along with the ‘konna’ flowers, rice and the gold from the ‘uruli ’. The gold and the rice are returned to the ‘ uruli ’ while the sacred flower is to be held against the eyes in reverence. There is also a custom practiced since earlier days, of giving ‘ kaineettam ’ to all the people associated with the household which used to be an extended family then, such as servants, field workers, land tenants, and other employees. The concept is symbolic of the sharing of wealth, abundance and happiness among all. 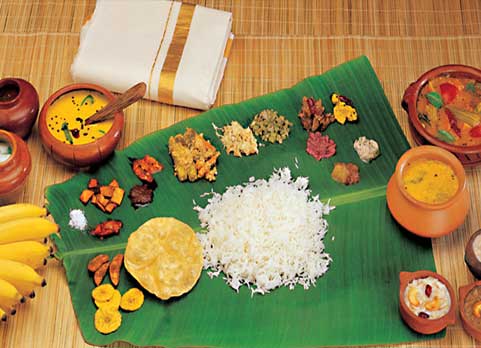 The highpoint of celebrating Vishu lies in the partaking of the traditional vegetarian feast or ‘ sadya ’ that is served on a plantain leaf. A typical Vishu ‘ sadya ’ consists of boiled rice with a variety of curries and side dishes namely the creamy ‘ kaalan ’, the bland ‘ olan ’, the assorted ‘ avial ’, the brown ‘ erisseri ’, the sour ‘ pulisseri ’, the sweet ‘ pachadi ’, the tasty ‘ kichadi ’ and the dry ‘ thoran ’, not to mention the numerous snack and savoury items such as sweet and sour banana chips, crisp jackfruit chips, spicy mango pickles, the pungent ‘ puli inji ’, the brittle ‘pappadam’ etc that supplement the grand feast. The highlight of the ‘ sadya ’ is the delicious dessert item, namely the ‘ pradhaman ’ or ‘ payasam ’.

The Vishu day culminates in the bursting of crackers, which has become part and parcel of the festivities, especially for children. Firecrackers are bought and stored in the house beforehand. It is generally done in the evening or night under adult supervision.

For more on festivals in Kerala, click Kerala festivals

For more on recipes in Kerala, click Kerala recipes