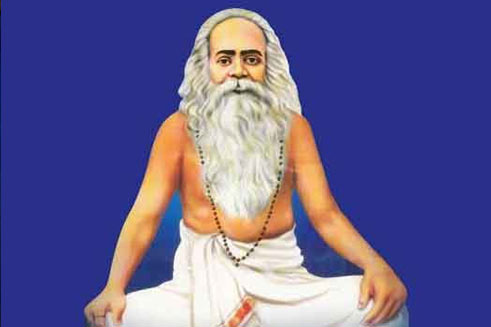 Chattampi Swamikal denounced the Orthodox interpretation of Hindu texts citing sources from the Vedas. Swamikal also worked for the emancipation of women and encouraged them to come to the forefront of society. He said that the enslavement of women was a manifestation of male arrogance. Swamikal promoted vegetarianism and professed non-violence (Ahimsa). He strongly opposed Christian missionary activities and criticized Christianity. He authored several books on spirituality and the history of language.

Chattampi Swamikal was known by different names throughout his intellectually and spiritually enriched life. The swami's original name was Ayyappan, although he was called Kunjan Pillai and later Shanmukhadasan. The Swamis father was Vasudeva Sharma, a Namboothiri, and his mother was Nanga Devi of the Ulluukod Nair tharavadu located in Kollur, a suburban village of Trivandrum in southern Travancore.

He joined the traditional school conducted by Pettayil Raman Pillai Asan, a renowned scholar and writer. It was there that he earned the name Chattampi on account of his assignment as the monitor of the class. The young Kunjan Pillai learned the art of yoga under the guru Thykattu Ayyavu whom he met at the Gurukulam. Kunjan Pillai was also called Shanmukhadasan due to his deep devotion of Lord Subramanya. It is said that in his youth Kunjan Pillai took to manual labor as a brick worker and later worked as a document writer in Neyyattinkara town, near Thiruvananthapuram.

It was in 1882 at the Aniyoor Temple near Vamanapuram that Chattampi Swami first met the young Nanu Asan. By then Kunjan Pillai was well versed in yoga and spiritual matters and their meeting proved to be the start of a profound and cherished companionship, although the two were of different temperaments.

Toward the end of his life, Swamikal settled down at Panmana, a village in Kollam district. After a prolonged illness, Swamikal attained Maha Samadhi on May 5, 1924. His mortal remains were enshrined at his Samadhistanam at Panmana. This site is today called Panmana Ashramam, which is a center for social service and spiritual practices.

Avoid boastful thoughts about your physical achievements and material accumulations. Contemplate over the ultimate reality of existence. That alone will give meaning to life.

The whole universe is the manifestation of the one. The apparent differences between different objects are only an illusion. An understanding of this truth will lead to liberation and salvation.

This universe is the manifestation of but one mind. Alienation between one mind and another mind is unnatural. The mind of man is in no way different from the mind of any other creature

Enslavement of woman is a manifestation of male arrogance. It is against all canons of justice and ethics. It is criminal, immoral Swami led a wandering life and left what he wrote with those who were with him at the time of writing. There was no later attempts to collect and conserve them which led to their gradual loss. A few works that got unearthed and published eight decades after his death and inspiring serious discussion show the value and the extent of the loss that occurred to Kerala society which was at one time unmindful of preserving his works. Recently Centre for South Indian Studies has initiated Chattampi Swami Digital Archive (CSDA) project as an attempt to collect and collate documents related to Swami that still exist.