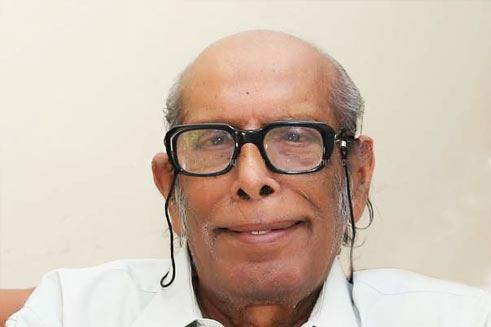 V. T. Thomas a.ka. Toms is a cartoonist from Kerala, India. He is the creator of the cartoon characters Boban and Molly (Malayalam:ബോബനും മോളിയും, Bobanum Moliyum).

Toms was born at Kuttanad in 1929 as the son of V.T. Kunjuthomman and Cicily Thomas. He graduated with a B.A. degree. Toms joined Malayala Manorama as a cartoonist in 1961 and worked there till his retirement in 1987.

Toms’ impish cartoon characters, Boban and Molly had become a household name in Kerala for over 40 years mainly through the pages of the Malayala Manorama Weekly. Besides Boban and his sister Molly, Toms peoples the cartoon with characters like Kunchukurup, Appy-Hippy, Unnikkuttan, Panchayat President Chettan, his wife, etc. who all had found a place in the hearts of Malayali society.

When asked by a young fan about the genesis of Boban and Molly, Toms said he had named the cartoon characters after two children in the neighborhood, Boban and Molly who one day came before him and asked him to draw their picture. Toms proceeds “This took place after these two naughty children thwarted every attempt of mine to prevent them from jumping the fence around my house and walking through the kitchen, on their way to school.”

The real-life Boban and Molly are now two grownups, Boban in Ernakulam and Molly in Alappuzha. When further asked about the age of the two cartoon characters Toms said “They are ageless. I have never made them to age because nobody would love a grandfather Boban or a grandmother Molly playing pranks.” But added a jubilant Toms “In fact just the other day I went to the naming ceremony of Molly's grandchild.” Recently they received awards from Mr. Vayalar Ravi in New Delhi.

Boban and Molly hail from the Kuruvelliterana family. Currently, both of them are settled in Kerala. Boban in and Molly in Alapuzha. In its peak of popularity, it is even said humorously that Toms had influenced the way the Malayali comes to read a magazine __ from back to front __ by way of habitually reading the Boban and Molly cartoon that had for long found a niche in the back pages of the Malayala Manorama Weekly.

Upon his cessation of employment with Malayala Manorama, Toms started publication of Bobanum Mollyum in Kalakaumudi which Manorama legally objected. A District Court temporarily restrained Toms and permitted Manorama to continue publication of the cartoon serial. On an appeal, High Court of Kerala ruled in pursuant of Indian Copyright Act, 1957, the ownership of cartoon strips drawn during Toms employment with Manorama shall continue to be with the appellant, while Toms will be free to own the characters Boban & Molly and continue creating cartoon strips to publish at his will. Accordingly, he has since then, been drawing and publishing the cartoon as the periodical publication.

Toms is married to Thresiakutty. They have three sons and three daughters.