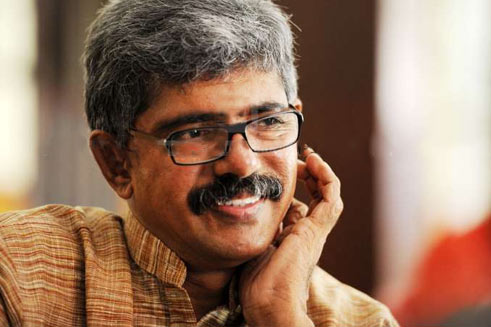 Balachandran Chullikkadu (Malayalam: ബാലചന്ദ്രന്‍ ചുള്ളിക്കാട്) is a renowned Malayalam poet from Kerala, India. He was born on July 30, 1957, in Paravur. He completed his graduation in English literature from Maharajas College, Ernakulam. His collection of poems published are "Pathinettu kavithakal", "Amaavaasi", "Ghazal", "Maanasaantharam", "Dracula" etc. A collection of his complete poems, Balachandran Chullikkadinte Kavithakal (The Poems of Balachandran Chullikkad) (2000) was published by DC Books, Kottayam, Kerala, India. They have also published the book of his memories, Chidambarasmarana (2001). He married the Malayalam poetess Vijayalaksmi. He participated in many national literary seminars organized by Central Academy of Letters, India. He was one among the ten members of a cultural delegation of India to Sweden in 1997 invited by Nobel academy and Swedish writers union. He represented Indian poetry in the international book fair in Gotenborg, Sweden in November 1997. In 2000 he took Buddhism as his own religion.[1] He is also an actor in Malayalam films and serials.