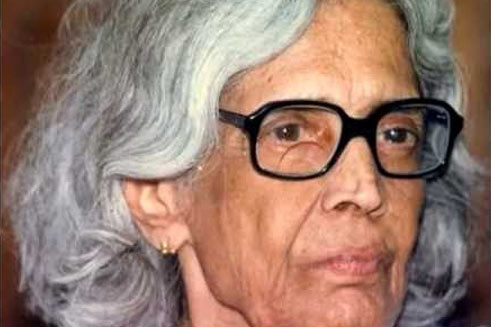 Padmabhushan Nalappat Balamani Amma (19 July 1909 – 29 September 2004) was a Malayali poetess. Considered by many to be one of the best Malayali poetesses, she won the highest literary medal in India, the Saraswathi Samman. She was married to a former managing editor of the widely-circulated Malayalam daily Mathrubhumi, V.M. Nair. She is the mother of the renowned writer Kamala Das who has translated one of her mother's poems, "The Pen", which describes the loneliness of a mother.

While delivering the Balamaniyamma remembrance speech at the Kerala Sahitya Akademi, Akkitham Achuthan Namboodiri, described her as the "prophet of human glory" adding that her poetry had been an inspiration to him. Balamani Amma was influenced by her uncle Nalappat Narayana Menon, Vallathol, Guru Cheruliyil Kunhunni Nambeesan, and by the Theosophical movement of India and Mahatma Gandhi. Her Father Chittanjoor Kunhunni Raja belonged to a branch of the Mooshakavansa, the oldest Rajavansa of Kerala and is the uncle of C. Kunjan Raja, of Adyar library. The family tree (genealogy) of Balamani Amma from 1790 is given on the website [www.nalapat.com]. The poetry of Balamani Amma is pregnant with philosophical thoughts of India and is compassionate with the love for entire humanity. Her poetry on the love for children and grandchildren earned her the title of Mother/grandmother of Malayalam poetry. Some of her books are Nivedyam, Sopaanam, and Lokantharangalil. She was interested in astrology, and philosophy of India and has written many poems on bhakti/jnana and karma. Nivedyam is the collection of poems of Balamani Amma from 1959 to 1986.