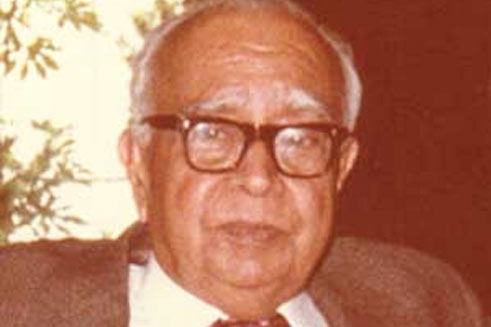 Kesava Shankara Pillai, better known as Shankar, was a famous Indian cartoonist. He is considered as the father of political cartooning in India. He founded Shankar's Weekly, Indias Punch in 1948, which also produced cartoonists like Abu Abraham, Ranga, and Kutty, he closed down the magazine in 1975 due to the Emergency then on he focuses exclusively on children’s work. But the children of his times, be it in India or elsewhere in the world, see him as their uncle who did much to make them laugh and enjoy life.

He was awarded Padma Vibhushan in 1976, Indias second-highest civilian honor given by the Govt. of India. Today he is most remembered for setting up Children's Book Trust established 1957 and Shankar's International Dolls Museum in 1965.

Shankar was born in 1902 at Kayamkulam, Kerala. He attended schools in Kayamkulam and Mavelikkara. The sleeping posture of one of his teachers was his first cartoon. He drew it in his classroom. This made the headmaster angry. But then he was encouraged by his uncle who saw in him great potential as a cartoonist. After schooling, he studied painting at Ravi Verma School of Painting at Mavelikara.

Shankar took the keen interest in dramas, scouting, literary activities etc. He amazingly did a good campaign for the collection of funds towards flood relief. This concern for the poor and the distressed people continued all through his life and reflected in his cartoons.

After graduating from the Maharajas College of Science (now University College), Trivandrum, in 1927, he left for Bombay (now Mumbai) for higher studies and joined join the Law College, but quit his law studies midway and started working.

Shankar's cartoons were published in the Free Press Journal and Bombay Chronicle. Pothen Joseph, the editor of The Hindustan Times brought him to Delhi as a staff cartoonist, in 1932 and continued as its staff cartoonist till 1946. Thus he and his family settled in Delhi finally.

Shankar's cartoons attracted even Viceroys like Lord Willington and Lord Linlithgow. During this time, Shankar had a chance of training in London for about 14 months. He spent the period in various Art schools, utilizing the opportunity to study the advanced techniques in cartooning. He also visited Berlin, Rome, Vienna, Geneva and Paris. When he returned to India, the country was in the thick of freedom struggle. The dawn of independence also favored Shankar's dreams for a separate periodical. The idea came true when Pandit Jawaharlal Nehru released Shankar's Weekly, edited by Shankar himself. However his cartoon also remained neutral often critical to his work, notably a cartoon published on May 17, 1964, just 10 days before Pandit Nehru death, showed an emaciated and exhausted Pandit Jawaharlal Nehru, with a torch in hand, running the final leg of a race, with party leaders Gulzari Lal Nanda, Lal Bahadur Shastri, Morarji Desai, Krishna Menon and Indira Gandhi in tow, to which Nehru remarked, "Don’t spare me, Shankar,".

Shankar loved kids and organized Shankar started the Shankar's International Children's Competition in 1949, and as a part of it, the Shankars On-the-Spot Painting Competition for Children in 1952. He instituted an annual Competition for Writers of Children's Books in 1978. Beginning with English this competition is now held in Hindi too. It later began drawing children from all over the world. Annual awards from Shankar's Weekly were presented by prime ministers.

He also founded the Children's Book Trust in Nehru House on Bahadur Shah Zafar Marg in New Delhi in 1957. Later in 1965, the International Dolls Museum too came to be located here. Thus Nehru House became a must visit item for kids going to New Delhi. It has now a children's library and reading room, known as Dr. B.C. Roy Memorial Children's Library and Reading Room and Library and a Doll development and production center.

Shankar's wife name was Thankam. He had two sons and three daughters. The Government of India released two postal stamps 1991, depicting two of his cartoons. He was a member of Kerala Lalit Kala Academy. He also published an autobiographical work, Life with my Grandfather, 1953, a Children's Book Trust publication.