John Abraham (born 17 December 1972) is an Indian film actor and former model.
Abraham was born in Mumbai to a Malayali father and a Parsi mother. His father is an architect from Alwaye, Kerala; his mother is named Phiroza Irani. Abrahams Parsi name is "Farhan" while his father being a Syrian Christian named him "John". He has a younger brother, Alan.
He studied economics at the Bombay Scottish School, Mahim in Mumbai and got his MBA from the Mumbai Educational Trust (MET). 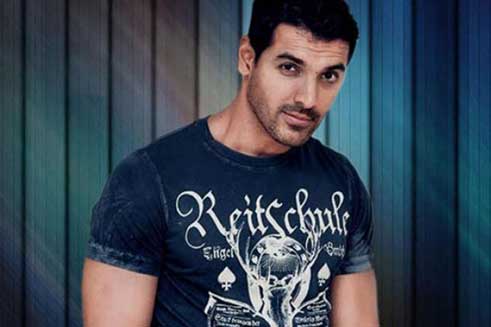 Abraham started his modelling career appearing in the music video of the song "Surma" by Punjabi singer Jazzy B. He then joined the media firm Time & Space Media Entertainment Promotions Ltd., which, however, closed because of financial problems. Later, he worked for Enterprises-Nexus as a media planner.In 1999, he won the Gladrags Manhunt Contest and went to the Philippines for Manhunt International, where he won second place. Following this, he was signed by Carrie Models in Singapore and did some modelling there; he later modelled in Hong Kong, London and New York City. He also appeared in a number of commercial advertisements and in other music videos for singers including Pankaj Udhas, Hans Raj Hans and Babul Supriyo. To improve his acting skills, Abraham joined the Kishore Namit Kapoor acting laboratory and completed an acting course while juggling modelling assignments.

In 2005 he starred in the supernatural thriller Kaal and the comedy Garam Masala both of which did well at the box office. Later that year, he had a major role in the critically acclaimed film Water, which portrayed the tragic fate of Hindu widows in British India of the 1930s. The film was written and directed by independent Canadian film-maker Deepa Mehta. It was popular internationally, and was nominated for the 2006 Academy Award for Best Foreign Language Film at the 79th Academy Awards. In the summer of 2006, Abraham performed at the "Rockstars Concert" along with fellow Bollywood actors Salman Khan, Zayed Khan, Kareena Kapoor, Esha Deol, Shahid Kapoor and Mallika Sherawat.In that same year, he starred in the films Zinda, Taxi No 9211, Baabul and Kabul Express.Among these Taxi No 9211 and Kabul Express were substantially successful. Nikhil Advanis multi-starrer Salaam-e-Ishq: A Tribute to Love was Abrahams first release in 2007. The movie failed to do well at the Indian box office,though it did well in the overseas markets. His last two 2007 releases included the arthouse thriller No Smoking and the sports film Dhan Dhana Dhan Goal. In 2008, Abraham starred alongside Abhishek Bachchan and Priyanka Chopra in Dostana, his only release that year. Produced by Karan Johar, the film performed well at the box office. His first release of 2009 was another much awaited production by Yash Raj Films, New York. The film was a critical and commercial success. It followed the lives of three best friends after the September 11 attacks in New York City. He has a fashion line— branded JA Clothes — which primarily features his favorite article of clothing, jeans