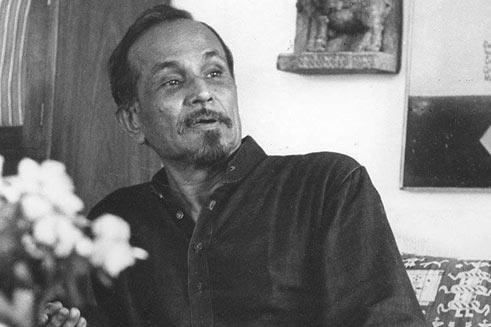 K. C. S. Paniker, (1911-1977) was one of the best metaphysical and abstract painters in India, took to interpreting the country's age-old metaphysical and spiritual knowledge in the 60s when Indian art was still under the influence of the western painters. "That was the time when a few Indian artists were trying to break out of this Western influence and establish an idiom and identity of their own," he once said.

Born in Coimbatore on May 31, 1911, and received his school education in Kerala and later in Tamil Nadu[1], the lush green village in which Panicker lived influenced the colorful landscapes of his early years. The bright colors stayed in his paintings, even though he moved away from landscapes onto other things.

A virtual child prodigy, Panicker began painting landscapes when he was only 12. By the age of 17, he was already exhibiting at the Madras Fine Arts Society annual shows. Somewhere in 1918, he gave up the college education to take up a job at the Indian Telegraph Department to support his family after the death of his father. It was not until the age of 25 that he joined the Government School of Arts and Crafts, Chennai (1936-40)

Since 1941, Panicker had been holding one-man shows in Chennai and Delhi. He founded the Progressive Painters’ Association (P.P.A), in Chennai in 1944 [2]. It was only in 1954 that he got the first international exposure when he held exhibitions at London and Paris. He became the Principal of the Government College of Fine Arts, Chennai, in 1957, and in 1966 formed the Cholamandal Artists Village, 9 km from Chennai, along with his students and a few fellow artists.

The exhibitions abroad and his exposure to abstract artists like Salvador Dalí had a major influence on his art. "They hark back to the weird, but spiritually uplifting figurative exaggerations of ancient Indian painting and sculpture," Panicker said.

Yet, the colors he used were bright and sunny, the kinds of colors that you see in the paintings of the Impressionists. Somewhere down the line, Panicker moved on to use calligraphy and symbols to project a state of metaphysical abstraction.

KCS Panicker died in Chennai at the age 66 in January 1977.KCS Panicker is considered as a leading figure in the Madras Art Movement. He is the founder of Cholamandal Artists Village.