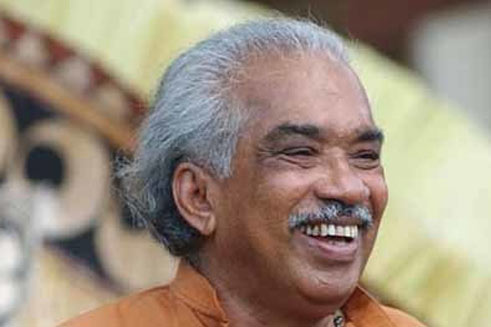 Kadammanitta Ramakrishnan (M. R. Ramakrishna Panikkar) (March 22, 1935 - March 31, 2008), popularly known as Kadammanitta, was an Indian poet. He was born in Kadammanitta province of Pathanamthitta district, Kerala. His childhood experiences, especially the Patayani songs, imparted strong influence in his literary work. With his powerful and mind provoking poems, he became one of the rebellious voices in modern Malayalam literature. More than anything, it was his style of reciting his own poems in a powerful and efficient manner that made him the darling of many progressives. He was awarded the Kerala Sahithya Academy award in 1982.

Ramakrishnan was born to Meletharayil Raman Nair and Kuttiyamma. He was influenced by the traditional religious art form of Patayani even from his childhood. After his degree studies, he went to Kolkata and then reached Chennai. He was employed with the Postal Audits and Accounts department in 1959. He worked in Thiruvananthapuram from 1967 till his retirement in 1992. Ramakrishnan's poem Njan was published in 1965. His first book was published by Kerala Kavitha Granthavari in 1976. There are more than 75 books to his credit. During his college days, he was involved with the student federation as well as the communist party. In 1992 he became the vice president of Purogamana Kala Sahitya Sangham (Progressive Association for Art and Letters), and in 2002 its president. In 1996, he was elected to Kerala state legislative assembly from Aranmula constituency in Pathanamthitta district. Ramakrishnan died on March 31, 2008, in a private hospital in Pathanamthitta.