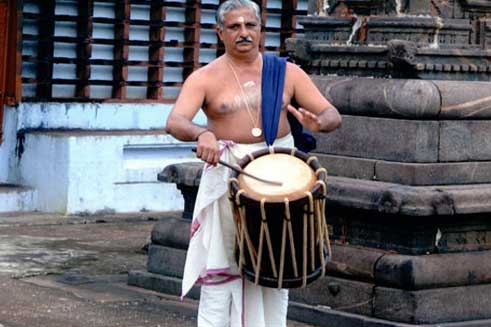 Vadya Kala Chakravarthy Peruvanam Kuttan Marar is a traditional ‘chenda’ artiste hailing from the village of Peruvanam in Thrissur district. He commands an indomitable presence as ‘mela pramaani’ in the classic drum ensemble named ‘panchari melam’ that is featured in the temple festivals of Kerala. He is a master of the chenda which is referred to as ‘asura vadyam’ owing to its loud, booming and rigid sound.
Kuttan Marar learned the chenda at a tender age. His father, late Peruvanam Appu Marar, and grandfather, late Peruvanam Narayana Marar were both well-known chenda artistes. He began his artistic journey by presenting amateur performances in local temples. He has also taught the chenda for some time at a school near his native place.
As malayaly melam buffs all over would know, the chenda which remains an integral part of the cultural milieu of Kerala is supposed to be the king among all percussion instruments, and Kuttan Marar, with his matchless ability, effort and performance, has rightfully earned his place as the emperor of percussion. The ethnic panchari melam or drum orchestra is the best known among existing temple arts or ‘kshetra vaadya kala’.

The festival – a feast

Panchari melam is made up of other musical instruments such as the ‘kurumkuzhal’, a nadaswaram look-alike wind instrument, the curved ‘kombu’ which gives out a trumpet-like sound having a resonating effect, and ‘ela thaalam’ or the chiming cymbal to keep up the rhythmic beat. Belonging to the genre of temple art, the unique percussion ensemble is still conducted strictly inside the temple premises. This category of melam is a typical feature of the central Kerala temples not generally seen in the other parts.

From his youth onwards, the master artist has been the lead presence and driving force behind hundreds of traditional melams performed within the precincts of innumerable temples throughout the state. Among the classic melams worth a mention are the ones held during the one-day festival of Thrissur Pooram at Vadakkumnathan temple in Trichur and the eight-day Poornathrayeesa temple festival in Tripunithura. It is said that the crème fanbase of ‘ulsava melam’ is concentrated in these two areas. The brilliant drummer has carved a niche for himself with his expertise and is an inevitable part and parcel of the drum orchestra at these two colourful festivals which can be truly called audio-visual treats. He himself has commented that it’s a delightful feeling to lead the ensemble at these major venues, surrounded by a discerning crowd that’s not only knowledgeable but appreciative as well.

It’s indeed a rare treat to watch the melam buffs gathered around the festival venue sway in rhythm to the reverberating beats emanating from scores of drums, with the excited crowd going into a frenzy as the sound reaches a crescendo.

Felicitation for the master

The maestro recently received the prestigious Padmasri award 2011from President Prathibha Patil for his immense contribution in the field of classical art and preservation of traditional culture. He is also the recipient of the Kerala Sahithya Academy Fellowship award 2010. Besides, several other honours and recognition from the State including Veera Srinkhala have come his way. Yet this simple, pious and humble man with a calm, majestic and pleasing countenance is not the one to get swept off his feet by all these acclaims and appreciation. He remains ever obliged towards his massive and steadfast fan following to whom he owes his success and achievements.

A documentary titled ‘Pranathi’ has been released on the life and passion of this great artiste, with focus on the temple festivals depicting melams of varied categories which he has helmed.
A few words about Thrissur Pooram: Aptly called the ‘pooram of all poorams’ or ‘mother of poorams’, it remains the biggest, brightest and most colourful among all temple festival celebrations in Kerala - the highlights being the grand display of tuskers decked in royal paraphernalia, the aurally divine symphony of ‘ilanjithara melam’ and the spectacular ‘kuda maattam’ ceremony – drawing huge crowds of enthusiasts, devotees and tourists from across the state and outside.