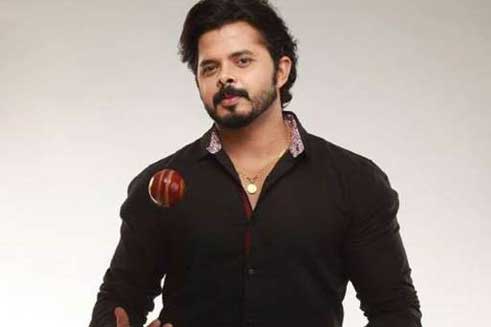 Sreesanth is a young and talented cricket player from Kerala who, through his performance in the Ranji Trophy matches, managed to make his debut in the Twenty20 version of the game, and further went ahead to be part of the Kochi Tuskers team included in the recent IPL series. He has made his mark in the game as a fast-medium pace bowler and a tail-ender batsman.

Sreesanth is the only player from the Kerala squad who has made it to the Twenty20 cricket matches. During his initial years, he started off as a leg-spinner and went on to play under the captaincy of Anil Kumble. He made his first-class debut against Goa in 2003, as a Ranji Trophy player, claiming 21 wickets in a series of seven matches. He also got selected to play for the South Zone Duleep Trophy match during the same season.

His hat tricks against Himachal Pradesh and New Zealand will be remembered by the cricket fans. He has represented the country in domestic limited-overs tournaments, and in the Challenger Trophy in 2005, earned the Man-of-the-Match award for being the top wicket-taker with a tally of seven wickets. Thereon he was part of the Indian home squad in the ODI series against Sri Lanka.

He played all five matches in the Indian tour of Pakistan, with a record haul of 4 for 58 in the 5th ODI at Karachi. A good home series against England in April 2006, in which he claimed 10 wickets at an average of 16.3, including a career best of 6 for 55 in the final match at Indore which led him to win the Man-of-the-Match award, subsequently resulted in his bagging a contract with the BCCI. However, at times he has shown himself as an expensive bowler and has been left out of the team by the selectors on many occasions.

Sreesanth made his debut appearance in test cricket in 2006 when he claimed 4 for 95 at Nagpur in the first test of the home series against England. He bettered his performance in the third test of the same series at Mumbai, bagging 5 wickets. He became the leading pace bowler during India’s West Indies tour in the same year.
In September 2007, Sreesanth joined the Indian team in South Africa for the inaugural Twenty20 World Cup in 2007. In spite of battling with inconsistency, he managed to make contributions responsible for his side’s success in the semifinals against Australia and in the finals against Pakistan, paving way for India grabbing the championship title.

Sreesanth five-wicket haul in the first innings of the second match of the home test series against Sri Lanka at Kanpur in 2009 earned him once more the Man-of-the-Match award and helped India win by an innings and 144 runs. Sreesanth was associated with the Kings XI Punjab in the IPL inaugural edition in 2008 wherein by hauling 18 wickets, he became the second leading wicket-taker in the tournament after Sohail Tanveer. He stayed put playing for the team until he made his contract with the Kochi Tuskers for the IPL 2011 series.

His image has taken a slight beating due to the eccentric and emotional outbursts he is known to display on the field. These temper tantrums with other players have got him mired in controversies and received flak from critics and commentators. Branded guilty of indiscipline and irrational behavior during the game, he has been fined many times and received warnings from both the KCA as well as the BCCI.

Nevertheless, it can be confidently said that the twenty-eight-year-old lad is a gritty player with plenty of potential in him and once toned down with the right kind of training and guidance, could become an asset to the team. He has also had some luck with the bat and has made some of the most spectacular and decisive catches in the game. In Mahendra Singh Dhoni’s words, he is one of the best bowlers of reverse swing.

He has played 24 test matches and 51 ODIs so far, claiming 79 and 75 wickets respectively. He has also bagged a total of 307 runs in all. Born on Feb 6, 1983, at Kothamangalam to Shanthakumaran Nair (a retired Life Insurance Corporation of India officer ) and Savitri Devi ( Treasury Department Official ). He has an elder brother - Dipu Santhan who runs a music company in Kochi). He has got two sisters among which Nivedita, his sister is a Television actress in Kerala and the other Sister Veritas (Divya )husband is Madhu Balakrishnan who is a popular playback singer.

In public, he remains ‘Sree’ to his friends and fans following, while his family members at home address him as ‘Gopu’. His hobbies include singing and dancing.