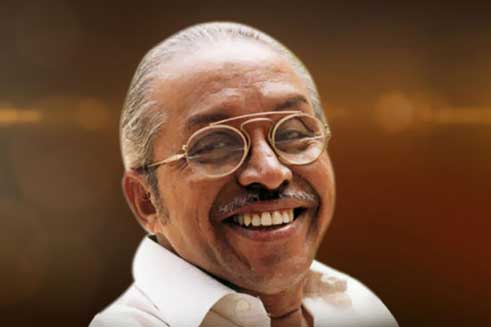 One of India’s greatest living poets. Mystic, profound, prophetic, gentle, pure — these words describe both ONV Kurup and his work. He is also well known as a poet who fights for the rights of the oppressed and the working class.

GOOD POETRY and MUSIC exalt one to the highest levels of civilization. Poetry and music should complement each other. Nothing is more captivating than a perfect blend of the two
- O.N.V.Kurup.

At the age of eight, O.N.V Kurup lost his father, who had planned to begin music lessons for him. This untimely demise had left him bereft and in unfamiliar circumstances. "I grew up like a prince when my father was around," he recalls. But life changed, unreservedly after his death. Poetry was a drop of light that came to him in the dark solitude of his childhood. And from then on poetry and songs started to live in him.

His poetic works:
His first published poem was 'Munnottu' (Forward) which appeared in a local weekly in 1946. It was only a sudden outburst of his high-spirited patriotic sentiments, but it marked the beginning of a long poetic career.

The first poetry collection was 'Porutunna Soundaryam' in 1949. His early poems (1946- 56) have been compiled in the book 'Dahikunna Panapatram' (The Thirsty Chalice).

Each of his poems creates its own music. He is an ardent lover of music though not wedded to its practice.

His expression:
To O.N.V a poem can be an ardent wish or prayer for peace for all or a motif of love that binds hearts together. It can be a deep sigh or a teardrop compelled by an inner grief when disturbed by some external force. He tries to focus for the rights of the oppressed and the working class.

Praise notes
"O.N.V. is not an ivory tower poet. He can often be found on the streets championing the rights of the aggrieved. He also voiced his protest against the commercialization of education," Mr. Vijayan -CPI(M) State Secretary

Poet Sugathakumari, says that his poems open up a world of 'hope' and 'belief'.