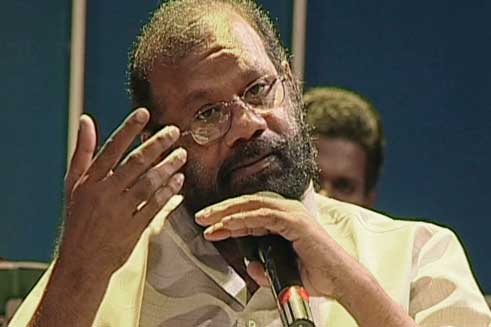 The aristocratic music director of Kerala who composed many soulful melodies won National Award for 'Bharatham' and received several state awards too.

Good music exalts and purges the mind and intellect. Children should be trained to listen to chaste classical music, which would enlighten them. Music is now being reduced to the mere cacophony and one has to be really selective, says the noted music director, Ravindran.

Malayalam film music has witnessed a few geniuses when it comes to music. If the colossus of the old era was G.Devarajan, the medieval era through the 90s was dominated by Raveendran. His contribution to MFM is immeasurable.

Raveendran(1943-2005 alias -Kulathupuzha Ravi) had composed many soulful melodies. He started his career as a playback singer in the 70's and evolved as one of the foremost music directors in the South, composing about 1,500 songs in 450 films in addition to a number of light music and devotional albums.

Raveendran had his degree in Music at the Swathy Thirunnal Sangeetha College, Thiruvananthapuram. Poverty in the family did not present him any ‘colourful’ days in his childhood. But he took that ‘dismal days’ positively and as a stepping stone for the 'hard' days ahead in his career as a singer/musician. He learned music along with noted singer Yesudas.

Kulathupuzha Ravi, as he was known then, had earned a name all over Kerala as a singer through the ganamela troupe. With a burning ambition in his heart to make it big in cinema, Raveendran moved to Chennai. After a prolonged hunt, he met music director Baburaj, who gave him a chance to sing in `Velliyazhcha'.

Later he became a dubbing artiste. His sonorous voice soon made him popular and he dubbed for all the films of Ravikumar, who was the hero in the 70's.

Finally, it was K.J Yesudas who helped him later for becoming a music director as Raveendran himself had strongly wished to be known as a playback singer! The big break in career came through the film Choola Directed by I. V. Sasi. This single movie itself had fetched him more chances.

Thaarake mizhiyithalil..., was the first song in the film Choola in 1979 that catapulted Raveendran to become the noted music director in Malayalam.

Jesudas altered the course of his life by persuading him to compose songs. After that, there was no looking back and the singer-turned-music director went on to script a success story which was repeated in the successive films. A majority of Raveendran's songs were sung by Jesudas and they shared a great rapport.

From 1979 on Raveendran ruled the roost of Malayalam film music. He had belted out many hits in the 1980s and 90s.

Melody incorporated with the fine points of Carnatic music was the hallmark of his songs! By the release of Thenum Vayambum (1981), Raveendran made his mark in the film field. The whole songs in the movie became a super hit! The songs, thenum Vayambum…, ottakambi naatham… are still sought- after numbers for Malayalees.

Raveendran had ‘created’ songs rather gave tunes to them. Maybe that is why his melodies are still standing the test of times.

Ravindran is perhaps one of the few music directors who insist on hearing the story of the film. He visualizes the situations and the background scores are made to suit the situations. He even narrates an embellished version of the original story to the playback singers too so that they could also make significant contributions.

He does not use any instrument to compose a song. "I use the harmonium just for the `shruthi' and a tabla for the rhythm. I sing the tunes and polish them to perfection. Harmonium can produce only flat notes. By singing a tune it would be easy to convey the nuances to the singers. They will easily get a true feeling of the mood and `gamakas' of the song,'' says Ravindran.

Ravindran has his own concept about a male voice. It should be deep and melodious. A singer should be able to render the bass and treble tones with effortless ease. K.J. Jesudas is the only singer who could do it to his satisfaction, he says.

Ravindran could effectively exploit the range of Jesudas. Right from the song `Tharake...' in his first film, `Choola,' to `Harimuraleeravam...' in `Aaram Thampuran,' the songs sung by Jesudas were proof of Ravindran's skill in putting to good use the talent of the singer.

Ravindran waxes eloquent on mentioning the name of Jesudas. "Dasettan can easily understand the moods and even the minute details of my scores. He insists that I should sing the track. We sync perfectly and that is the success of our teamwork,'' he explains.

Jesudas: He was like my brother. He gave me a lot of scopes to improvise and was able to bring out the best in me. We shared a great rapport for many years and I should say that he was instrumental in my success.

Jayachandran: No other music director was able to incorporate classical, Hindustani and folk music into film songs and throughout he was able to give quality music. I will miss the `Raveendran style` of music forever. We all lost a great music director”.

Chitra: Raveendran ‘mash’ was my guru. He was instrumental in my coming to Chennai. He was my mentor and role model. He used to keep the melodious song in his albums for me to sing. Among all the good songs that I have sung, it was the ‘Nandanam’ songs that are my personal favorite.

His family: He is survived by wife Shobha and three sons.

His end of life's journey: On 04 March 2005, Noted music director Raveendran passed away in Chennai following a cardiac arrest. He also suffered from Cancer.