The Dadasaheb Phalke Award winner for the year 2004

President A P J Abdul Kalam presenting filmmaker Adoor Gopalakrishnan with the prestigious Dada Saheb Phalke award for the year 2004 at a colorful function in Vigyan Bhavan in New Delhi on 21st October 2005. 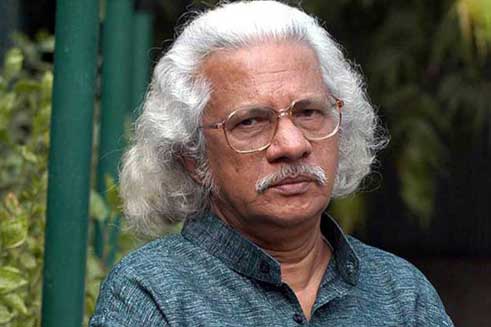 Adoor Gopalakrishnan was born in 1941. He started acting on the amateur stage at the early age of eight and wrote and directed over twenty Plays in his student days. After graduating in Political Science and Economics, he joined the Film Institute in Pune in 1962. Equipped with formal training in Scriptwriting and Direction, he went on to script and direct nine feature films and more than two dozen Shorts and Documentaries.

Adoor Gopalakrishnan, a director of Malayalam cinema, India has now become an international icon in the film world. Four of his films have won the National Award and he won the International Film Critics Prize for five consecutive films.
He has been awarded the Dadasaheb Phalke Award for the year 2004, the highest award for a person connected with films conferred by the Government of India.

He is also a recipient of the Padma Shri, a civilian award in 1983.

Apart from nine feature films, he has over 30 short films and documentaries to his credit. All the nine films he directed, from Swayamvaram to Nizhalkkuthu, were screened at several International film festivals and won him several National and International awards.

He won the British Film Institute award for Elepathayam.
He is an alumnus of FTII.
Apart from his films, Adoor's major contribution towards introducing a new cinema culture in Kerala was the constitution of the first Film Society in Kerala, 'Chalachitra'.
He also took an active part in the constitution of 'Chitralekha', Kerala's first Film Co-operative Society for film production.

These movements triggered a fresh wave of good films, called 'art films' by directors like Aravindan, P A Becker, K G George, Pavithran, and Raveendran. At a time this movement was so strong that even the popular cinema had to make synthesis with art cinema to create a new genre of films.

Swayamvaram: The Selection 1972
Swayamvaram won the President's Gold Medal for best film and Sharada won the National award for best actress in 1972.

Vishwam and Seeta arrive in a city as eloped lovers. Vishwam is in the lookout for a job, while he hopes for a life as a writer. When he fails so, the economic pressure forces them to shift to a cheaper hotel from their expensive one and eventually to a slum, with a prostitute as the neighbor. Vishwam has to be satisfied with a job at a tutorial college and later when he loses it he settles with a job at a timber mill. Poverty ultimately leads Vishwam to illness and his death, leaving Seetha a destitute widow with a small baby. The film ends with the scene of Vishwam's perplexed wife gazing at a closed door.

Kodiyetam won the State award for the best film and the National award for best actor for Gopi in 1977.

Shankaran Kutty lives a childish life even at his mid ages. He ignores his identity as a grown up individual and wanders without taking up any responsibilities and also without reacting to the insults by the society. It is the festive season, the drum beats at the temple, flying kite, and speeding up vehicles that attract him the most. He begins to come to terms with real human relationships through an encounter with a truck driver.

The film unfolds at the slow, rhythmical pace of a village festival which provides the opening imagery of the tale. The main character's maturation to adulthood draws parallels to the social and historical changes in Kerala.

Unni is the head of a feudal Nair family, unable to cope with the changing social conditions leading to the decline of the feudal system in Kerala. While his elder sister Janamma fights for her own family share from the feudal spoils, his younger sister Rajamma obediently serves him as a slave, and finally collapses under the strain. Sridevi the rebellious youngest sister walks away from the family rejecting the old system. Confronted with adverse conditions, Unni withdraws like a rat into a dark hole.

Mukhamukham won Adoor Gopalakrishnan the National film award for best director in 1984 and the State awards for best film and best director.

The first part is set during the 1945 - 55 period, prior to the short-lived electoral victory of the Communists in Kerala. The second part takes place ten years later after the split of the Communist party into two.

Sreedharan, a charismatic leader of a leftist trade union is the moral strength of the laborers going through a prolonged strike in a tile factory. The proprietor of the factory gets killed and Sreedharan becomes the prime suspect. While the police start hunting for him, he goes underground. Even when his comrades return to a more liberal political environment, Sreedharan doesn't. He is believed to be dead. Sreedharan who acquires martyrdom becomes the sole unifying factor of the two break-away fractions after a split in the Communist Party.

Anantaram won Adoor Gopalakrishnan both State and National awards for best director in 1987.

Ajayan, an orphan is brought up by a doctor. A brilliant child, Ajayan grows up into an introvert and confused youth. The beautiful Suma arrive at their house after marrying Balu, his foster-brother. Ajayan at the very first sight of his sister-in-law gets sexually attracted to her. This creates internal conflict within him and ultimately he leaves the house.

In the second story, Ajayan narrates his confused youth and about the beautiful girl, Nalini who enters his life. Ajayan's mind shifts often between reality and an imaginary romantic world. Finally, both these stories converge to a point where both Nalini and Suma become a single entity.

Mathilukal is Bashir's(renowned Malayalam writer, Vikom Muhammad Bashir. ) memories of jail life during the early 1940s when he was imprisoned by the British Government for "anti-national" activities.
Confined to the narrow space of a prison cell, Bashir falls in love with a woman in the neighboring prison compound. They are separated by a high wall so that they never see each other and have to devise ingenious ways for communicating. Narayani, Bashir's love is presented as a female voice and never appears in person in the film.

Thommy, a Christian migrant labor from Kerala is an obedient slave of his aggressive, tyrannical landlord Bhaskara Pattelar. Thommy obeys all the orders of his master, whether it is to make his own wife sexually available to his master or in killing Pattelar's kindly wife, Saroja. When Patellar escapes to a jungle, due to his own deeds, Thommy escorts him like a pet. But when Patellar gets killed Thommy exults in freedom.

An Indo-Japanese co-production, Kathapurushan won the National Film Award for best film in 1995.

Born in a feudal family, the protagonist, Kunjunni's parents were separated leaving him deprived of paternal care and affection. He grew up receiving love and affection of his mother, grandmother, the estimate manager and his friend Meenakshi - the maidservant's daughter.

Inspired by his uncle, Vasu, who became a Gandhian and later a Marxist, Kunjunni too gets drawn towards leftist ideology during his college period. For him, communism offers a cure for all social ills and inequalities. He joins an extremist Maoist group, providing it with intellectual leadership. He gets arrested in a police station attack case and eventually gets released when the Court acquits him.

Now lonely, disillusioned yet not bitter, a lot more mature and richer with experience, he goes searching for Meenakshi, his childhood friend.

Kathapurushan is the dramatization of Kerala's history since the onset of the Independence struggle.

The plot is set in the 1940's in a Southern village of Kerala. Kaliyappan, the last hangman of Travancore dynasty is dragging his remaining life by consuming alcohol and worshipping the Mother Goddess. The reason for this self-destruction is the remorse born out of the feeling that the last man he hanged was an innocent.

While pulling on his life by boozing, worshiping the Goddess and treating people with the ash obtained by burning the hanging rope, one day the King's messenger once again arrive with the Kings order of appointing him for executing a convict termed as 'a killer, proved beyond doubt'. He leaves to the jail with his Gandhian, freedom fighter son to assist him in his job.

As a tradition, the hangman has to spend the eve of the execution awake. When alcohol fails to keep Kaliyappan awake, the jailer starts telling a 'spicy tale' to keep him awake, the tale of a 13-year-old girl raped and killed by her own brother-in-law and an innocent musician boy convicted for this charge.

When Kaliyappan comes to know the condemned person he is about to hang is that very same musician boy, he breaks down. The job of executing the convict is passed on to his assistant, his son. The Gandhian, freedom fighter son, who is in revolt against the existing system accepts the job without any protest and walks towards the gallows to accomplish his job.