The first Indian athlete ever to win a medal in a World Championships in Athletics clearing 6.70 m in the year 2003. 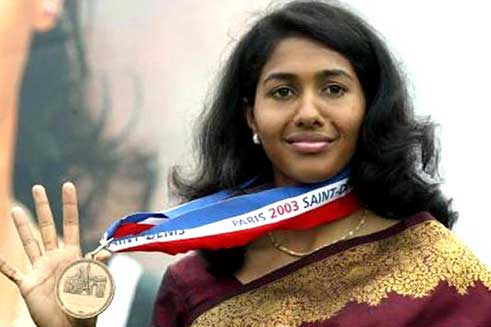 Anju Bobby George, became the first Indian athlete ever to win a medal in a World Championships in Athletics clearing 6.70 m. She created history when she won the bronze medal in Long Jump at the 2003 World Championships in Athletics in Paris. She went on to win the silver medal at the IAAF World Athletics Final in 2005, a performance she considers her best. She received the prestigious Arjuna award in 2002-2003 for eminent sportspersons from the government of India and the country's highest sporting honor, Rajiv Gandhi Khel Ratna award in 2003-2004 after her success in the World Athletic meet. She was conferred Padma Shri, India's fourth highest civilian award in 2004. Anju now ranks 4th in the world, her highest ever.

Anju was born on April 19th, 1977 in Cheeranchira Kochuparambil family in Changanasseri, Kerala to parents K.T. Markos and Gracy. She was initiated into athletics by her father and her interest was further kindled by her trainer Mr. Thomas in Koruthode school. She won her first event - a lemon-and-spoon race, at age four - after hours of practice. She did her schooling in St. Ann's High School and CKM Koruthode School. In the School Athletic meet in 1991-92, she came first in 100 m hurdles and relay and second in long jump and high jump events and became the women's champion. Anju's talent was noticed in the national school's games where she won third place in 100 m hurdles and 4x100 m relay. She graduated from Vimala College and was also successful in being the Calicut University Champion.

She started off her career with Heptathlon but later on began to concentrate on her jump events and went on to win long jump medal in the 1996 Delhi junior Asian championship. In 1999 Anju set the national record for triple jump in the Bangalore Federation Cup and Silver medal at the South Asian Federation Games in Nepal.

In 2001 Anju bettered her own record in the long jump to 6.74 in the National Circuit Meet at Thiruvananthapuram. In the same year, she also won gold for triple jump and long jump in the Ludhiana National games. Anju reigned supreme in her events in the Hyderabad National games also. She won the bronze medal clearing 6.49 m at the 2002 Commonwealth Games at Manchester. She also won the gold medal at the Asian Games in Busan.

She made history when she won the bronze medal clearing 6.70 min Long Jump at the 2003 World Championships in Athletics in Paris, becoming the first Indian athlete ever to win a medal in a World Championships in Athletics.
She achieved her personal best of 6.83 m at the 2004 Olympic Games at Athens that brought her the sixth position.
In September 2005, she won the gold medal in the women's long jump at the 16th Asian Athletics Championship in Incheon City of South Korea with a leap of 6.65 meters. She went on to win the silver medal at the IAAF World Athletics Final in 2005 with a leap of 6.75 m, a performance she considers her best.
Anju's talent was helped by the extraordinary family she married into. The credit for her success goes to her husband and coach Bobby George who according to her was the biggest influence who helped her in realizing her potential and achieving the goal.

Bobby who is a Mechanical Engineer and a former National Champion in Triple jump himself, gave up his career to become a full-time coach to Anju in 1998. He belongs to a prestigious sports family and is the younger brother of the famous Volleyball player Jimmy George.

Anju and Bobby, realizing that international exposure is essential for competing in World class events made necessary arrangements and trained with Mike Powell, a world record holder, before the World Athletics meet, which gave her valuable exposure in technique.

Anju is employed with the Customs department while her husband Robert (Bobby) George is with the Public Works Department, Government of Kerala. They live and train in Bangalore.