Kamala Suraiya, besides being one of India’s best-known English poets, is the most famous writer of short stories in Malayalam. [She is better known to Keralites as Madhavikutty.] 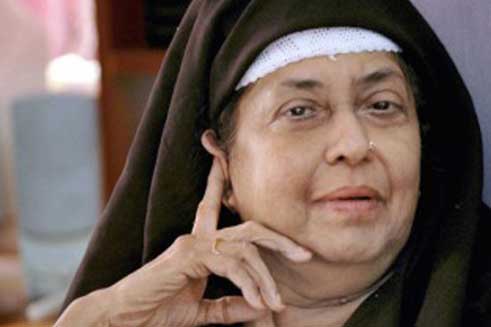 Born on March 31, 1934, in Malabar in Kerala, India, she has been Madhavikutty to Malayalee readers and Kamala Das to her English fans. Daughter of the late V.M. Nair, former managing editor of widely-circulated Malayalam daily Mathrubhumi and renowned poetess Nalappat Balamani Amma, she embraced Islam and turned Kamala Suraiya.

Like her parents, Kamala Das also excelled in writing. However, she did not start writing professionally until she was married and became a mother. Her love of poetry began at an early age through the influence of her great uncle, Nalapat Narayan Menon, a prominent writer.

Das was also deeply affected by the poetry of her mother, Nalapat Balamani Amma, and the sacred writings kept by the matriarchal community of Nayars. She was privately educated until the age of 15 when she was married to K. Madhava Das. She was 16 when her first son was born and says that she "was mature enough to be a mother only when my third child was born". Her husband often played a fatherly role for both Das and her sons. Because of the great age difference between Kamala and her husband, he often encouraged her to associate with people of her own age. Das says that he was always "very understanding"

As her career progressed, her greatest supporter was always her husband. Even when controversy swirled around Das' sexually charged poetry and her unabashed autobiography, My Story, Das' husband was "very proud" of her. Though he was sick for 3 years before he passed away, his presence brought her tremendous joy and comfort. She stated that there "shall not be another person so proud of me and my achievements".

Das has dabbled in painting, fiction, and even politics. Though Das failed to win a place in Parliament in 1984.

She is famous for her many Malayalam short stories as well as several poems written in English. This Keralite is recognized as one of the foremost poetesses of India. She is also a syndicated columnist. She has moved away from poetry because she claims that "poetry does not sell in this country [India]," but fortunately her forthright columns do. Das' columns sound off on everything from women's issues and child care to politics.

In 1999, she converted from Hinduism to Islam and changed her name to Kamala Suraiya. Like the themes of her stories, the conversion too kicked up much heat and dust in the social and literary circles.

She is also active in politics in India and has launched a national political party known as the Lok Seva Party, to concentrate on humanitarian work as well as to provide asylum to orphaned mothers and to promote secularism. In 1984, she was short-listed for the Nobel Prize for Literature along with Marguerite Yourcenar, Doris Lessing and Nadine Gordimer.

When the government decided to give the prestigious Ezhuthachan award to her considering her overall contribution to literature, the Sangh Parivar criticized the decision, saying that Surayya had nothing in common with the poet in whose name the award was instituted.

Over the past four decades, Kamala Das has published many novels and short stories in English, as well as in the Indian language of Malayalam under the name Madhavikutty.