Eco-friendly Architect and Engineer, known as the 'brick master of Kerala,' He has transformed individual creativity into collective expression through his efforts at addressing the housing problems of the country. 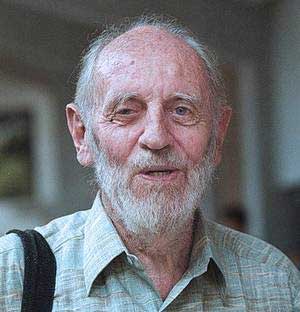 The British-born architect has lived and worked in India for more than 50 years. He has taken Indian citizenship and now resides in Thiruvananthapuram (Trivandrum), Kerala.

His turning point - The education

When he was seventeen, he went on a cycling tour of Europe with friends. Fascinated by the unfolding vistas of nature, landscape, cities, the different life patterns of people and the differences in the houses from place to place, that tour proved to be a turning point in his life. Back from tour, he thought of a career in architecture and soon after he joined the Birmingham School of Architecture.

Returning to England in 1944, Baker was delayed in Bombay for three months waiting for a steamship. Through Quaker associates, he was introduced to Mohandas Gandhi, who expressed concern over the state of Indian architecture and asserted that much good could be done in rural India by committed architects. Baker returned to England briefly and then, taking Gandhi’s words to heart, returned to India to see how his skills might best serve the communities of Uttar Pradesh in northern India.

Baker met and married an Indian medical doctor, Elizabeth Jacob, and the two of them worked for years in the Himalayas building and operating schools and hospitals, working with lepers and the poor.

In 1963, Baker and his wife moved to the southern state of Kerala, Elizabeth’s homeland, establishing themselves in the city of Trivandrum in 1970. Working with local materials and exploring indigenous architectural traditions, Baker’s reputation began to grow.

In India, he is well known for designing and building functional brick homes, with special features utilizing natural air movement to cool the home's interior. A significant Baker feature is irregular, pyramid-like structures on roofs, with one side, left open and tilting into the wind. Baker's designs invariably have traditional Indian sloping roofs with gables and vents allowing rising hot air to escape.

Laurie Baker has been committed to not only learning from and using traditional Indian architectural techniques and technology but also building with traditional Indian materials. Gandhi once exhorted builders to only use materials gathered within five miles of a construction site. And though this Gandhian ideal is not always possible, Baker has promoted the use of brick, lime, tile, palm thatch, stone and local granite in place of ‘modern’ materials like steel, glass, and concrete.

You can’t get more sustainable or renewable a resource than mud, and Baker is its champion. Approximately 58 percent of all buildings in India today are made of mud brick, some as many as 50 to 100 years old. Mud is gathered either at the construction site or very nearby, formed into bricks and dried in the sun. It is readily available and can be made by people with limited initial training—all resulting in projects that can be built at a fraction of the cost of those using concrete and steel. Baker is especially fond of mud’s total recycle-ability: simply add water and reuse it.

Baker has truly adopted his motto to “make low-costly a habit and a way of life” by reusing everything, from brick to glass bottles, as building materials. “One of the things I’m noted to be crazy for is that I use old colored bottles set in cement—they give a nice light,” comments Baker. His own home, made entirely of mud brick, is a model of his recycling ethos; including timber salvaged from an old boat jetty. Other signature elements of his design include the use of circular walls, which use far less brick than rectangular walls. In addition, when he does use concrete for a roof, he embeds chipped or broken terra cotta roofing tiles into the mixture. These tiles, which normally would be thrown away, contribute to the strength of the roof, allow less of the expensive concrete to be used, and reduce the structural load of the building.

Baker believes in creating dwellings that respect the earth and the homeowner equally.

Baker playfully uses curved forms.
The living room at 'The Hamlet'. An integration of new building and salvaged timber from traditional buildings that were being demolished
'The Hamlet', Laurie Baker's home in Thiruvananthapuram, built on a steeply sloping and rocky hillside that hardly had any vegetation when Baker started constructing it, is now a visual delight.
Baker's innovative use of discarded bottles, inset in the wall at Col. Jacob's residence in Thiruvananthapuram, creates a stained glass effect.
The Loyola Chapel, reflecting Baker's mastery over light.
The Computer center at the Centre for Development Studies, Thiruvananthapuram. Here Baker evolved an innovative system of curved double walls to save on cost and to conserve the energy that goes into air-conditioning a building of this scale and purpose.