A Brief look at the life of Our Beloved Catholicos Baselios Mar Thoma Mathews II who passed away on 26thJan 2006.

Facing death with honesty and courage 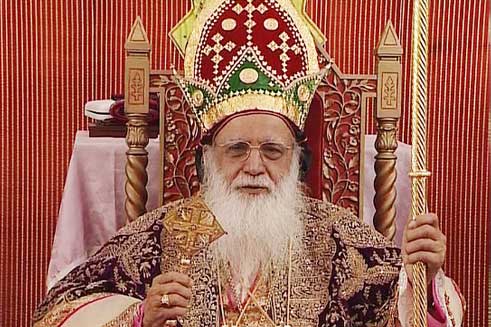 His Holiness Moran Mar Baselios Marthoma Mathews II born January 30, 1915, was Catholicos of the East, Malankara Metropolitan, and 89th successor to the Holy Apostolic Throne of St. Thomas. His Holiness was born at Perinad in Kollam District of Kerala, and had his religious training at Old Seminary Kottayam and also at Basil Dayara, Pathanamthitta. Later he joined Bishop's College, Calcutta for his B. D. Degree, and studied Theology at the General Theological Seminary, New York. H.

He was ordained as Deacon in 1938 then as Priest in 1941. It was during his stay at St. George Dayara Othara that Father Mathews made a mark as a devoted and an able priest of the Indian Orthodox Church. On May 15, 1953, he was ordained as a Bishop of Orthodox Church at the age of thirty-eight. As Metropolitan of the Diocese of Kollam, he was responsible for its growth and progress and the number of parishes almost doubled within a short period. Several monasteries and convents were started. A large number of educational institutions and hospitals were established. Several Colleges, Schools, Hospitals and other service institutions were established and administered under his direct control and leadership.

It was in 1980 that he was unanimously elected by the Malankara Syrian Christian Association as successor to the throne of Catholicos of the East and Malankara Metropolitan. Due to ill health and old age, His Holiness voluntarily resigned his position as the Supreme Head of the Indian Orthodox Church on 29 October 2005.

Our departed beloved Bava Thirumeni's life had been a demonstration of faith lived out. We must praise the way in which the Bava Thirumeni had approached his own death with courage and acceptance.

I believe in these past few months, we've seen an extraordinary 'lived sermon' for Christians all over the world, about facing death with honesty and courage; facing death in the hope of a relationship which is not broken by death but continues beyond it.

Bava Thirumeni showed his character in the way in which he met his death; clearly frustrated, clearly suffering and yet at every point accepting; facing his frailties and remaining courageous and hopeful. I feel there's certain appropriateness about the fact that he died between the Christmas season and Great Lent - a time of the Church's year which meant so much to him. It has been a season in which he was able to convey his message to the whole world describing God's love by sending His only begotten son to save us and that a Christian must lead a sacrificial life as Christ died on the cross for redeeming us.

It was due to his excelling virtue, his teaching, and his most vigilant zeal as shepherd of his people, that he won the title Great. In expounding the deeper mysteries of our faith, the excellence of his teaching is so radiant with the majestic richness of priestly eloquence. His passionate devotion, in thought and feeling, word and action, truth, harmony, and peace for the welfare of the Orthodox Church must be noted.

He was a true theologian and a diplomat. His experiences greatly strengthened our Church when he came into office. He was a man who had lived through the toughest and most testing times of the modern age. He was fully aware of the fact that the Church has to be something different from simply being an institution of the modern secular society; that it has to offer different values, virtues, and different hopes to the believers. He was a defender of Church unity. His passion for a unification of the churches, ecumenism, maintaining harmony and peace among Christians should not be forgotten. In doing these he showed something fundamental, something distinctive about being a Christian which is of huge authority.

The wisdom, the wealth and scope of his teaching, the loftiness of his mind, his unfailing charity-these are the things which our Bava Thirumeni brought to enhance the church and our faith in our Almighty God. We feel it incumbent upon us to highlight his high moral and ethical values and his immortal merits. I am confident that his blessed life in this world can be of great spiritual value to us all, and increase the prestige and promote the spread of our Faith.