The architect of India's Milk Revolution, also known as the Milkman of India, and made India the largest milk producer in the world.

Dr. Verghese Kurien (born November 26, 1921) is called the father of the White Revolution in India. He is also known as the Milkman of India. 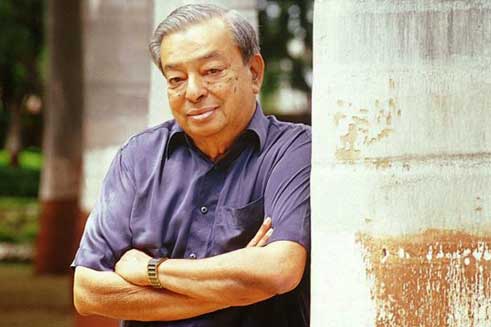 He is the chairman of the Gujarat Co-operative Milk Marketing Federation Ltd.(GCMMF). GCMMF is an apex cooperative organization that manages the Amul food brand,(Anand Milk Union Limited-AMUL). He is recognized as the man behind the success of the Amul brand.

The White Revolution. Milk was scarce in urban areas while in rural areas milk producers could not make a decent living. Distribution was a key problem, there were also various vested interests, lack of information and infrastructure. Anand's Kaira Milk Co-operative showed how problems could be tackled.

The White Revolution found a way to provide cheap milk for under-nourished children in the Mumbai area and Gujarat, and later all over India. The techniques and technologies used were then copied by others.

Kurien's philosophy was simple -- put power in the hands of the people.

Empowering the masses and initiating constructive social change in rural areas -- from building 'milk roads' to participating in elections.

Education
Dr. Kurien graduated with Physics from Loyola College, Madras in 1940 and then did B.E. (Mech) from the University of Madras. After passing out of the University, he joined the Tata Steel Technical Institute, Jamshedpur from where he graduated in 1946. He then went to the USA on a government scholarship to earn his Master of Science in Mechanical Engineering (with distinction) from Michigan State University.

Career
When he came back to India, he was posted as a dairy engineer at the government creamery, Anand, in May 1949. Around the same time, the infant cooperative dairy, Kaira District Cooperative Milk Producers' Union Limited (KDCMPUL), -- now famous as Amul -- was fighting a battle with the Polson Dairy, which was privately owned. Young Kurien, fed up with being at the government creamery, which held no challenge, volunteered to help Shri Tribhuvandas Patel, the Chairman of KDCMPUL, to set up a processing plant. This marked the birth of AMUL.

The White Revolution:
Dr. Kurien has since then built this organization into one of the largest and most successful institutions in India. The Amul pattern of cooperatives had been so successful, in 1965, then Prime Minister of India, Shri Lal Bahadur Shastri, created the National Dairy Development Board (NDDB) (NDDB) to replicate the program on a nationwide basis citing Dr. Kurien's "extraordinary and dynamic leadership" upon naming him, chairman.

Kurien also set up GCMMF (Gujarat Cooperative Milk Marketing Federation) in 1973 to sell the products produced by the dairies. Today GCMMF sells AMUL brand products not only in India but also overseas.

Dr. Kurien, plays a key role in many other organizations, ranging from chairing the Viksit Bharat Foundation, a body set up by the President of India to the chairman of the Institute of Rural Management's Board of Governors in India.

Awards
For his contribution to the dairy industry, Dr. Kurien has received top awards not only in India but also overseas.