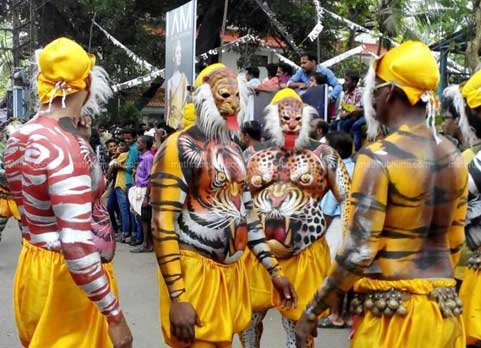 Tripunithura in Ernakulam district of Kerala, also known as the temple town, is the land of royalty, having served as the capital of the erstwhile Cochin royal family comprising about a 1000 odd members now scattered in different parts of the country and abroad. Their stronghold was Kottakkakom in Tripunithura, referred to as Trippy by the localities. Kottakkakam houses some of the striking remnants of the royal times such as the historic Clock Tower, Hill Palace Museum, once the administrative center of the Maharajas, which is now a research center, and Kalikotta, the venue for cultural and literary events.

Onam, the annual harvest festival of Kerala, features myriad cultural and social events across the state, cutting through all sections of people. The Athachamayam festival celebrated exclusively in the royal town of Tripunithura, marks the true spirit of Onam, highlighting its religious and communal harmony. Tripunithura Athachamayam is a spectacular fete which marks the beginning of Onam celebrations in the Chingom month of the Malayalam calendar. This grand event features a dazzling ceremonial parade of caparisoned elephants, colourful floats, awesome folk art performances like Theyyam, Pulikkali and Kavadiyattam, classical dances like Kathakali and Mohiniyattom, percussion bands like Pandimelam and Panchavadyam, tableaus depicting scenes from history and mythology, decorative flower carpets - the trademark of Onam, and so on. 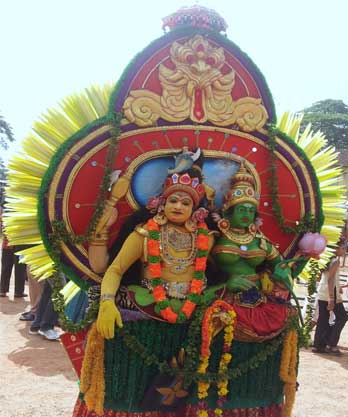 Atham, the day which heralds the 10-day Onam festivities, is celebrated with great enthusiasm at Tripunithura.In earlier times, the Athachamayam Festival was celebrated in honor of the Raja of Kochi. On the festival day, the Maharaja undertook the ritualistic Attachamayam march from Tripunithura to the Vamanamoorthy Temple in Thrikkakara. He then offered his special prayers there. The grand parade made a halt at the royal quarters at Puthen Bungalow enroute and later marched towards the sprawling Hill Palace compound. The Maharaja gave 'darshan' to his innumerable citizens during this day.

Representatives from all communities accompanied the Kochi Maharaja during Athachamayam. They included a priest from Karingachira Church, head priest of the mosque Nettur Thangal, and Chembil Arayan, a representative of the fisherfolk. Today, a senior representative of the Cochin royal family, along with the other two religious leaders, jointly flag off the ceremony.

Although the reign of royalty had come to an end with the attainment of independence and re-organization of states, the festival is still celebrated in all its glory to mark the beginning of Onam, the state festival of Kerala. Onam festivities in the district begin with the ceremonial parade of Athachamayam at Tripunithura. Some of the folk art forms such as Theyyam, Kummatti, Kolkali, Mayilattom, Karakattom, Kummi, Poykal, Ammankudam, Pulikkali, Kathakali, Aattakkavadi, Panchavadyam, Chendamelam etc are displayed in the parade. Floats depicting immortal moments from epics like Mahabharatha and Ramayana and from the Bible as well as current social issues, reflect the secular nature of the festival, highlighting unity and harmony. Myths and legends of yore in the forms of gods and goddesses lend color and meaning to the event. There are also cultural competitions and variety entertainment activities held as part of the festival. Apart from the regular footpath vendors who deal with items from handicrafts and cottage sectors, a ten-day trade fair is also organized at Tripunithura. 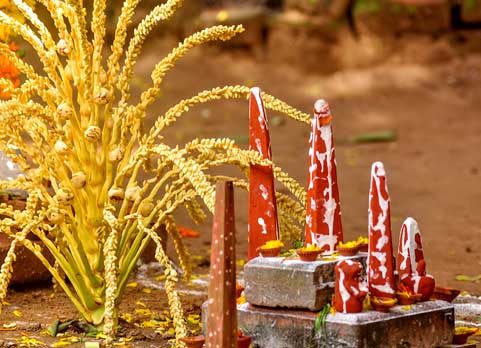 This festival brings alive the memories of the legend of Mahabali and his kingdom and also the golden rule of the Kochi Maharajas. Athachamayam used to be celebrated as an occasion to showcase the regal pomp as well as to herald Onam, the festival of peace and equity. It was held as a tribute to the bygone days when everything good was available in abundance. During Atham, the whole of Tripunithura wears a festive look and vendors line up the streets selling all kinds of wares that include conical clay mounds representing Mahabali and Vishnu, called ' Trikkakkara Appan'. These are placed at the center of beautifully decorated flower carpets created on the dung-plastered courtyards on the Thiruvonam day.

Athachamayam in the bygone days was the only one day in the year when all the people, irrespective of caste and creed were allowed to enter the Kottakkakam or inner precincts of the Fort. The last such Athachamayam was held during the reign of Rama Varma Pareekshith Thampuran. Post independence, with the emergence of the union of states, Athachamayam sank into oblivion from the cultural scene. However, in the early sixties, the people of Tripunithura decided to revive the festival. Athachamayam was renamed Athaghosham.

Ever since the formation of Tripunithura Municipal Council in 1980, Athaghosham is being conducted under its leadership. With the participation of thousands of artists from all over the state, Athachamayam has been made a community festival and people from all walks of life actively take part to make it a success. Today Athaghosham marks the beginning of the ten-day celebrations in Ernakulam district. The colorful Raleigh retains its majestic charm and is conducted in a spectacular manner with an enthusiastic response from the public.

After the flag hoisting and the lighting of the lamp, the ceremonial parade is taken out in the narrow streets of Tripunithura town, headed by a person dressed as Lord Mahabali. Art forms of ancient and modern times, floats and folk dances add color and substance to the Raleigh. Athaghosham is not a mere pageant, it is a unique experience, an event that lingers long in our memory.