A Kerala mural is a painting mainly seen on the walls, ceiling, of temples and palaces. It shows the events of pre-historic times and many themes from Indian mythology. Kerala temples have a long history of fostering a culture... The cultural life of the people was centred around the local temple. People went there to listen to music, see plays, and attain peace sitting under a banyan tree with its leaves rustling in the breeze and murmuring the mantra of Shanti. 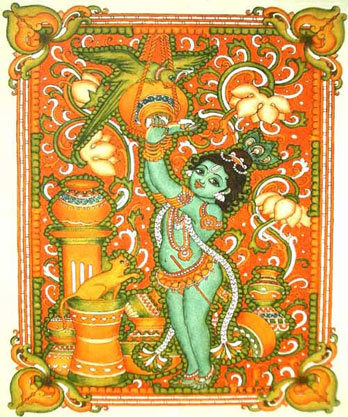 Medieval artists in different parts of India were engaged in painting and the medium, at that time, was the walls of temples, palaces, and monuments. The subject of the wall paint used to be scenes from epics like the Ramayana and Mahabharata.

In Kerala, only a few of the wall painting in temples survive as a reminder of the existence of this exquisite art form. Prominent places were ancient murals exist are the Padsmana Swamy Shine in Thiruvananthapuram and the temples of Ettumanoor, Panaynarkavu and Guruvayur. Mural also adorn old palaces such as those at Padmanabhapuram, Krishnapuram and Mattancherry.

Kerala has a distinct temple culture. The rituals inside Kerala temples are unique. The architecture and sculpture outside the temples are also distinct. The ceremonies to differ from those of temples in other parts of the country as they are performed with the accompaniment of special percussion instruments like the Chenda. The artworks in temples like Kathakali and Oottamthul have no parallel as they have a truly distinct identity.

Sharp lines from the Skeletal support for the body of Kerala murals and this unique features makes it distinguished and rich. Subjects for the murals are varied with gods, goddesses, saints, kings, birds, animals, plants, trees, creepers and flowers all in their natural splendour most commonly seen.

Murals are created on a meticulously prepared white surface. The colours are made from natural substances of mineral or vegetable origin. For example, red, brown and yellow pigments are made from soft stone powdered and refined while green colour comes from the leaves of herbs. Blue is derived from the Indio plants. Black is made from the carbon deposited while burning a wick dipped in vegetable oil. Even the brush is handmade from shoots of arrowgrass deftly tied to a bamboo stick In short nothing is brought from the shop.

Kerala murals have a long history to their credit. The history dates back to the 16th century as discovered in the Edakkal Caves. Later in the mid-seventeenth century, the revival of the Bhakti movement gave a boost to mural art. 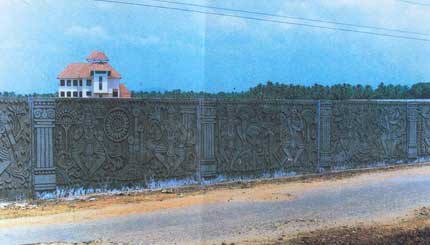 Longest outdoor mural in the world is neglected for many unknown reasons. Chitramathil or the Wall of Cement Murals is on the walls of the Sree Sankaracharya University of Sanskrit, Kalady, and a small hamlet in Ernakulam District of Kerala, India and also the birthplace of Jagadguru Adi Sankaracharya. It was a masterpiece creation of artist K.K.Suresh. It is 1200x 5 ft. long, unique compound wall around university campus depicting various themes from Hindu Mythology and Puranas. It received an entry in the Limca Book of Records for being the longest Mural Wall.

It received an entry in the Limca Book of Records for being the longest Mural Wall.

The Chitramathil is the endeavour of a single artist- K.K.Suresh done by him within 66 days.

The Objective of Chitramathil is to create an understanding of the rich Indian Culture and Tradition. It is a magnificent example that 'pictures speak better than words'.

Major projects and other creative works