Padmanabhapuram, the palace complex of the erstwhile Venad Kingdom, the forerunner of Thiruvithamkoor, is 65 kilometres south of Thiruvananthapuram. The walls of its central hall are profusely decorated with mural paintings. The themes of paintings are various episodes and moments drawn from Hindu epics. 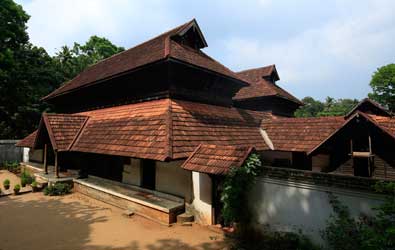 This is situated in a serene village named after the age-old Krishna temple. It belongs to the Kayamkulam dynasty. This palace has the largest mural panels of Kerala depicting the scene of Gajendra Moksham picked from Bhagavatham. The Palace was built during the period of Anizham Thirunal Martanda Varma (1729-1758 AD, 904-933 ME) after the annexation of Kayamkulam to the erstwhile State of Travancore The Palace is noted for its characteristic style of Kerala Architecture such as the gabled roofs, narrow corridors, dorm windows, pent roofs and so on. It also houses one of the largest single panel Mural paintings so far discovered in Kerala known as Gajendra Moksha, which measures 53 sq.ft in area. An Archaeological museum is set up in the Palace in which stone and wood sculptures, bronzes, copies of Mural paintings, coins, megalithic remains, stone inscription and such historically and archaeologically important objects are preserved and protected.

Hindu mythological themes are painted on the entire walls of the Sapta Matha (Seven Goddesses) temple of Panayannakkavu, situated in the luxuriant grove near Parumala and girdled by a tributary of Pampa river, two miles from Mannar.

Ettumanoor, near Kottayam, has a centuries-old Siva Temple. The walls of the sanctum are painted with scenes from the epics along with an imaginative scene of a music concert by the gods, goddesses and celestials are depicted in this temple.

Pundareekapuram is a small temple atop a small hill called Midayikunnam near Thalayolapparambu, in Kottayam District dedicated to the Lord Vishnu mounted on his vehicle Garuda. The temple is filled with mural paintings on the frolics of Krishna and other scenes from Hindu epics.

Mattancherry, within the City of Kochi, was the select spot where the king and the royal family frequented to worship in the Siva, Vishnu and Bhagavathy temple there. The Portuguese trade adventurers built a Palace for the king in 1552 AD in the Bhagavathy temple compound in acknowledgement of the favours received. The palace has rich mural paintings of scriptural stories by Hindu Artists all over.

It is situated at Akapparambu near Ankamali in the suburbs of Ernakulam has beautiful frescos depicting characters and stories from the Bible.

It has exquisite paintings on either side of the main door of the church and around the altar.

The fresco paintings of Kerala is classified as "Fresco-secco" characterised by its lime medium and technique in which the prepared walls are painted only when it becomes completely dry. 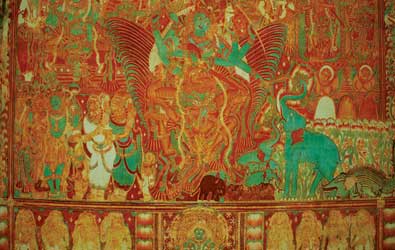 As per the 'Shilparatna', the principal text on Indian painting techniques, white, yellow, red, black and terre-verte or Syama are the pure colours that are to be used, either alone or mixed to derive a different hue. Ochre-red, Ochre-yellow, white, bluish green and pure green are the predominant colours that are used in Kerala murals, while limited use of golden yellow, brown, yellowish green, greenish blue and sky blue is also can be noticed.

Lemon Juice or solution of Thuris (Copper Sulphate) was used to apply on the surface to mellow the alkalinity of lime before painting the surface. Colour dyes were prepared from vegetable, mineral pigments and crude chemicals. White is made out of lime, black from carbon soot of lamps, red and yellow from minerals, blue from plants like Neela Amari (Indigo Ferra) and green from a local mineral called Eravikkara. Ancient scriptures also recommend the use of yellow arsenic (Realgar) and Vermilion (red lead) for getting yellow and red colours. Lac also was used for obtaining deep red. Mixing of colours was done in wooden utensils and the binding media used were tender coconut water and exude from Neem trees.

Painting is followed by an overcoat with a mixture of pine resin and oil for providing it with the lustre and fastness to it. Mainly three types of Brushes, flat, medium and fine, are used to apply the paint. Flat brushes are made from the hairs found on the ears of calves, medium from the bottom of goat's belly and fine brushes were made by the thin hairs from the tails of muskrats or narrow grass blades. Shilparatna advocates the use of nine brushes in the above three types for applying each colour. 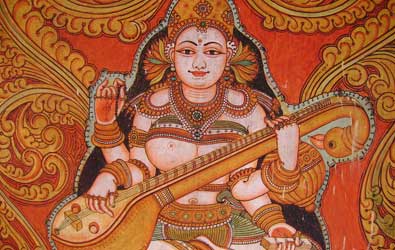 Once the theme is selected, the outline is sketched with dung crayons and then painted with appropriate colours. Five stances are recommended for depicting human figures, Frontal, Half-frontal, Askance, One-and-quarter-eyed and Profile. Shilparatna recommends three types of colouring the human characters as per their virtue. The Hindu scriptures classify human race as Satwa (the noble) Rajas (active after power) and Tamas ( low and mean characters). The Satwik is depicted by shades of green, Rajasik by red or gold and Tamasik in white and the demons and demonesses by black.

The art of painting on walls in Kerala dates back to the prehistoric era. Paintings found in the Anjanad Valley of Idukki District are believed to be the oldest. Archaeologists opine that these belong to different periods from early Paleolithic era to recent past that the history can reach. Rock engravings belonging to Mesolithic era also were unearthed in Edakkal in Wynad and Perumkadavila in Thiruvananthapuram District. The source and inspiration of Kerala style mural painting may be the Dravidian temple devotional art of Kalamezhuthu elaborated more elsewhere below. A mural tradition of Kerala influenced by the Pallava art can be traced back to seventh and eighth century AD. The oldest in them is believed to be in the rock-cut cave temple of Thirunandikkara that is now in Kanyakumari district of Tamil Nadu.