HINDUISM, the world's oldest religion dates back to about 5000 BC. The sacred texts include the Vedas, Epics, and Puranas, apart from other philosophical treatises. Hinduism is a way of life and is based on the principle of Sanathana Dharma. The Hindus worship the Supreme Being under three forms, Brahma- the creator, Vishnu- the preserver and Shiva - destroyer. 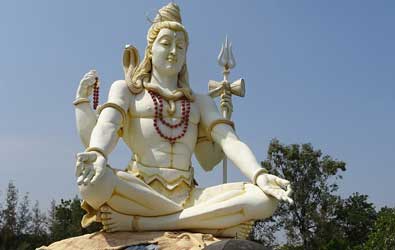 Hinduism differs from Christianity and other Western religions in that it does not have a single founder, a specific theological system, a single system of morality, or a central religious organization. It consists of "thousands of different religious groups that have evolved in India since 1500 BCE."This religion is called: Sanatana Dharma, "eternal religion," and Vaidika Dharma, "religion of the Vedas," and Hinduism -- the most commonly used name.

Various origins for the word "Hinduism" have been suggested: It may be derived from an ancient inscription translated as: "The country lying between the Himalayan mountain and Bindu Sarovara is known as Hindusthan by combination of the first letter 'hi' of 'Himalaya' and the last compound letter 'ndu' of the word `Bindu.' Bindu Sarovara is called the Cape Comorin sea in modern times. It may be derived from the Persian word for Indian. It may be a Persian corruption of the word Sindhu (the river Indus).

The Hindus thus worshipped the Supreme Being under three forms, Brahma, Vishnu and Shiva representing the creative, preservative, and the destructive forces. Rama, Krishna, and other divinities are the avatars reflecting the later developments of Pauranic Hinduism. However, there was no sharp demarcation of sects in Kerala, unlike the sects in North India. If any preferential adoration was shown by any person, the reason was that it was the presiding deity in the village temple or his/her Ishta Devata or Kula Daivam (family deity). The religion of the common people too became an elevated form of the earlier Dravidian religion. The refined gods replaced the rude divinities that once occupied the highest echelons. Later, the various castes like Ezhavas, Nadars, Uralis were formed on the basis of their occupation.