Banasura Hill : Banasura Hill, one of the tallest mountains in the Western Ghats of Wayanad district in Kerala, after Chemba Peak, is 2000 m above mean sea level between Nilgiris and Himalayas. The magical breeze and air around this place is mind blowing and the peacefulness the mountain gives is worth for a lifetime. Trekking is the best activity to do in the Bansura Hill and to have a great trekking experience, one has to take a deviation at Vellamunda Village and go via Pulinjal to reach the peak. The good three hour climb towards the peak would lead to a spectacular view that is sure to fill your heart with eternal happiness and joy. 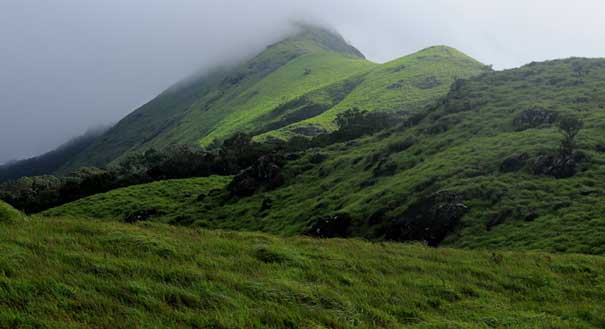 Kurumbalakotta Kurishu Mala : Kumbalakotta is a hill located 991 m above sea level and is 20 km west of Kalpetta in Wayanad district, Kerala. It is one of the largest single upright block of stone shaped into a pillar or monument in Kerala. It is located in the Kottathara Panchayath of Vythiri Thaluk, in the center of Wayanad and also a part of Deccan Plateau and the meeting of Western Ghats and Eastern Ghats. The hill gives a pleasant atmosphere for trekking and one can see the full scenery of the Wayanad plateau after the climb.

Pakshipathalam : This place can be accessed only by trekking. Rare species of birds can be sighted from the watch tower of this bird sanctuary. Being one of the finest trekking spaces in the entire country, Pakshipathalam in Wayanad, Kerala is a favourite trekking spot for trekkers in and around the world. The trekkers get the opportunity to walk through the peaceful flora and fauna of Wayanad, feeling blessed and overwhelmed with the experience. The hill lies 1740 m above the sea level. There is a cave nearby, which is believed to be used by great saints in the olden times. Is is ast a distance of 88 km from Kalpetta, 32 km from Mananthavady and 7 km to north-east of Thirunelli. It is suggested to take a 3 hour trek to enjoy the landscapes of the bird sanctuary at its best.

Chembra Peak : At 2100 m above mean sea level. Chembra is the highest peak in Wayanad and is an ideal area for trekking. It is a part of the Wayanad hill ranges in the Western Ghats of India, next to Nilgiris and Vellarimala in Kozhikode district in Kerala and is located near the town of Meppadi. It is 8 km south of Kalpetta and is accessible by foot from Meppady. 'The Chempra Peak VSS' under the control of South Wayanad Forest Development Agency organize the visits to the peak and provide guides and trekking equipments on hire charges to tourists.

Lakkidi : Lakkidi, the gateway to Wayanad, is situated 700 m above mean sea level , at the crest of the Thamarassery Ghat pass. Lofty peaks, gurgling streams, and luxuriant forests add magic to the journey up the winding roads to this hill station. There are many places to visit near Lakkidi, like Vythiri, the nearest town, the chain tree, Pookkot lake and a sightseeing point, all of which are within 5 km of Lakkidi. Many endangered species are found in this area like the lion tailed macque, rare birds, Indian Shag, Little Cormorant, Little Green Heron, Pond Heron etc and should not be missed by animal lovers at all. During the colonial rule, Lakkidi was the secret route for the Adivasis of Wayanad and is said to be found by Karinthandan, an Adivasi who helped a British officer to pass through the same route which was smallest route to pass the ghat. After finding the secret road, the officer killed Karinthandan who then began haunting the travellers who passed the ghat, leading to a lot of accidents which resulted in the death of many travellers. Thus a priest was called and his spirit was tied onto a tree with a small chain. It is believed that the chain grows with the tree. This place has now become a tourist spot.