Local folklore has it that Kerala was "reclaimed" from the sea by the warrior sage Parasuraman by a throw of his battle-axe. Whatever the truth behind the legend, the fact remains that Kerala is a land with a huge necklace of canals, lagoons, lakes and rivers. These water bodies are loosely known in the local parlance as the backwaters. This peculiar landscape has had a distinct impact on the lifestyle of the people who live along the banks of these backwaters. Kerala uniqueness lies in its backwaters - found nowhere else in the world.

They form a beautiful and economically viable feature of Kerala. The 41 West-flowing rivers of Kerala form a backbone to this magnificent gift of nature. In the olden days, this water highway stretched from the South of Kerala right up to the northernmost part of the state. But the situation has closed many of these waterways now. There is an ongoing project to reopen the old waterways, especially for the tourism industry. The backwaters are a gateway for the visitor to see first hand the unhurried village life of rural Kerala. The life is tough and traditional work is highly labour intensive - a reason for the strong Communist sympathies of the rural folks. Here one meets the people engaged in country boat building, prawn cultivation, sand mining, coir manufacture, limestone collection (by divers who are specialists in this field), rice farming and duck rearing.

Such unhurried life holds a certain fascination for the visitor to these places. It is small wonder then, that this place is also a strong magnet for the millions of tourists who come here from all over the globe to encounter the unbelievable beauty of the place and the life of the millions besides these backwaters. The journey normally begins at Alapuzha, because of its large network of canals. The journey winds through the small canals out into the Vembanad Lake. This place is also called Kuttanad, once the rice bowl of Kerala. Interestingly, this place is one of the few places below sea level. Using a clever system of dykes and bunds, cultivation of paddy goes on.

One beautiful backwater holiday destination is Kumarakom, which was "discovered" barely a decade ago. The lagoon here, with its spectacular view and fringed by coconut groves, has been featured in travel books all over the world. A 14-acre bird sanctuary adds to the natural beauty of Kumarakom. Water ducks, cuckoos, Siberian storks etc are regular visitors here. Years ago, an Englishman Henry Baker had constructed his bungalow here. This has now been taken over and converted to heritage hotel by the Taj group and is one of the finest around. Not far from here is another heritage resort - Coconut Lagoon - also rated as one of the finest anywhere in the world by travel writers. 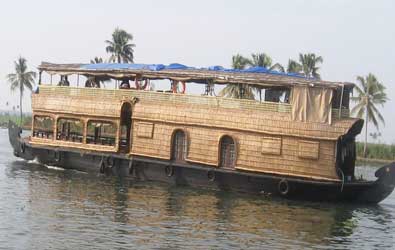 And not surprisingly, the entrepreneurs among the people here have introduced a spruced up version of the "Kettuvallam" (covered canoes) with all the modern trappings of luxury. These "houseboats", around 200 in all, are a world apart and unique to this region. With the tourism flow into Kashmir at low ebb, these have to some extent replaced the houseboats of the Dal Lake. These regal houseboats run by private tour operators do not come cheap, but the experience will leave one with a true sense of the wonder that is Kerala.

Back to the backwater cruise. You could go to Kollam through a maze of rivers, lakes and lagoons. The sights are truly out of this world. The last part of the trip is through the Kayamkulam Lake and then to the Ashtamudi Lake in all its pristine glory. Or you could go the other way around and go to Kochi, the commercial Capital of Kerala. This trip is also through myriad lagoons, rivers and lakes.

In the monsoon months, these backwaters reverberate with the sound of the traditional snake boat races, featuring the 130 feet long Chundan boats. It is believed that these boats were designed for ancient Naval battles fought in these backwaters. Local chieftains of the then kingdoms of Vadakkumkoor (Northern Kingdom), Thekkumkoor (Southern Kingdom) and Chempakassery all maintained their Chundan boats. Today these are still being used in another "battle", when up to 16 of them, with over a hundred rowers each, vie for top honours on the day of the races. The most important of these races is the Nehru Trophy Boat Race held on the second Saturday of August.

The Aranmula boat race is more traditional and is associated with temple festival there. The Aranmula Boat Festival The Parthasarathy temple of Aranmula (Aranmula is famed for the metallic mirror, used by royalty of pre-independent India.) is on the banks of the holy river Pamba. It is believed that Lord Krishna and Balarama visited this place after the battle of Kurukshetra. Legend has it that since Balarama found a high ground to escape the floodwaters and rested there, Lord Krishna in a fit of jealousy created a more elevated spot and rested there. Hence this temple has two sanctum Sanctorums -one for Lord Krishna and one for Balarama at a lower level. The boat carnival starts on the day of Thiruonam, the most auspicious day of the Kerala festival, Onam.