The full skirt with a long blouse that formed the traditional teenage dress of Malayali girls is fast disappearing from the Kerala fashion scene. It, however, is still worn by village girls though their counterparts in the city have slowly discarded it. On ceremonial occasions and festival days, the long skirt with pleats and kasavu Boarder with front or back open blouse is worn.

With the advent of the North Indian fashion dress on a large scale in Kerala, the half sari dress is seldom seen in any part of Kerala. The half sari that was worn earlier consisted of a full skirt, short blouse and a davani (shawl) and sari blouse. 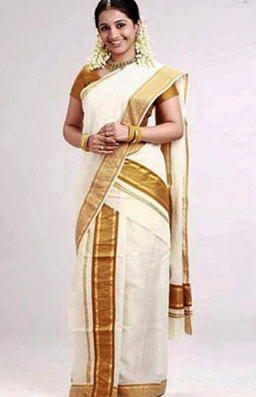 The demand for the set mundu among the women of to contrary to general belief is in fact growing. It is a form of the sari in two sets worn with a blouse. Used primarily on festival occasions like Onam and Vishu and for visiting temples, the set mundu is available in Sandalwood color or white color with silk border or colored border. It is worn in the same fashion of a sari, but without pleats in the front. Though initially intended as a ceremonial dresses in the ancient times it has however attained a position of being worn by both young and old on all occasions.

From very ancient times sari has been closely associated with the women of Kerala and it still forms the major mode of dress even today. A 5-meter long cloth, It is worn together with a small blouse. It is however a tough job to learn to wear a sari in a proper manner and one needs to practice a lot.

Sari is the official dress in various ceremonies like wedding, engagement and during various festivals in Kerala.

The men in Kerala wear a full-sleeved dress called the jubba and is worn together with the mundu a long white cloth tied to the waist and let down till the ankle. The Jubba is worn only on selected occasions. Jubbas in modern days has been embellished with embroidery works. The materials used are cotton, silk and khadi. 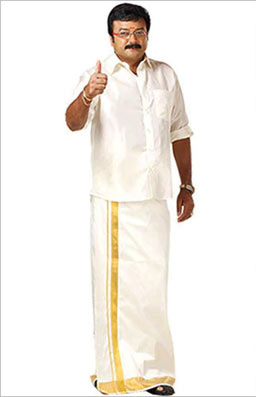 But such is not the case with the traditional attire of men. Mundu, a garment worn around the waist in places like Kerala, Tamil Nadu, Tulu Nadu and the Maldive Islands etc, is a popular attire among men from the olden times till now. It is usually made of cotton and is white or cream coloured. It is mostly starched before use. A thicker piece of cloth is attached in the border of the mundu called the kara, which is of different colours or of a golden embroidery called the kasavu. The mundu is sometimes folded to the knee by men while working, but it is considered disrespectful to talk towomen and elders with the mundu folded.

Some of the hindu traditions in Kerala make the wearing of mundu mandatory for men. For Hindu marriages, the men must wear mundu with a shirt or mel mundu. It is also considered as a proper clothing for men while going to temples and to enter some temples in Kerala like the Guruvayoor Temple and Sree Padmanabhaswami Temple, mundu is amust.