Earlier, all that the groom had to ensure was a clean-shaven countenance and an on-the-dot arrival to the venue. But now, if the bride's beauty regimen begins a month in advance, so does the groom's! The male health and beauty parlours feel that the groom's make up too is equally important on the D day! In the past, things were different, the groom did not have to fuss about the way he turned out for his wedding. The trend these days is that the guys to want to be in their glamorous best. After all, it's his special day too., and he has to match up to the looks of the bride. Men's packages comprise make-up for the day and this includes hair setting and foundation. There is also the extensive one-month treatment consisting of" gold facials". There is also "the natural look" package for the groom beside the regular facials, henna and hair colouring.

On the day of the wedding, the "radiance stick" technique is used so that the groom photographs well. If the hair is black, it would appear dull. On the other hand, if it is coloured, it gets a sheen. If the groom and the bride get to the salon together, it would be easy to give the couple a total" makeover". So, rather than makeup, the in thing is makeover these days.

Makeup Treatment for the Modern Man 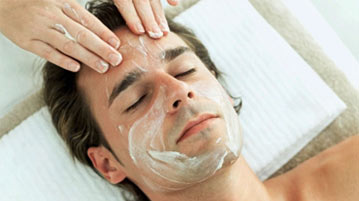 While she is becoming bold, he is becoming beautiful. As the modern Indian woman gears up to meet challenges in the corporate boardrooms, her counterpart, slowly but steadily, sheds his stereotyped traditional macho male role model and readies to explore the feminine world.

Meet the modern Indian metrosexual who has just discovered the joys of dressing up. This exfoliated, moisturized, tweezed, blow-dried and sweet smelling man, like the resplendent peacock, is keen to announce loudly that he can be as adventurous as 'she'. He has, after all, tasted the forbidden fruit - the orange peel facial or the cucumber and clay face mask.

Men are dressing up as they have never done before, points out a global survey done by multinational advertising agency Euro RSCG. "The new age man has realized that it is not macho to be macho anymore and is keen to break the traditional male roles and explore the feminine world," the survey says.

So why should the new age Malayalee man be keen to be left behind? From regular visits to beauty parlours to patronising Clarins -a Paris based cosmetic company exclusively for men, or sporting Sindoor as a fashion statement he has done it all.

"Grooming is essential for both men and women. And since the past few years, Indian men have been as keen in presenting their well-groomed persona to the public as Indian women. For well-dressed men, shaving or haircut had always been a necessity, but now a regular manicure and a pedicure are an absolute must," says Javed Habib, who runs Habibs, one of the most popular beauty salons for men across the country.

Officials at the better-known beauty parlours in the country's metros agree that over the past few years, the number of men opting for facials or manicure has increased to a significant extent. "When the men's section at Sangam opened about 15 years ago, most of our customers came in for a shave or a haircut. But now quite a number of them come in for beauty treatments as varied as eyebrow shaping to waxing or facials," they said. 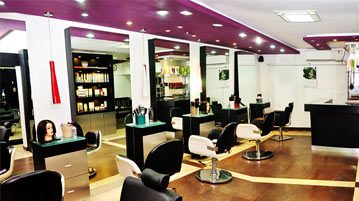 Today, men can opt for a wide range of beauty treatments, just like women, says Ajay of the Shahnaz for Men. The salon, which has branches all over the country, offers the same beauty treatments to men and women. "Even for men, we have facials like the pearl or the gold facial, which are becoming increasingly popular. Eyebrows and threading of upper lip are now as essential to a well-groomed man as a shave or a haircut. After all, if given an option, who would like to have bushy eyebrows or joined eyebrows?" he counters.

One of the customers of the reputed chain of the Shahnaz parlours remarked that earlier it was considered effeminate for men to groom themselves or dress up for an occasion. According to Bipin, "But now the entire outlook has changed. A man has an equal right to make himself look good as a woman. And for me, nothing is more relaxing than having a facial on a Sunday after a hectic week."

In this race to look good, professional compulsions also seem to have played a part. Bipin affirms that most of his friends in the metros were regular visitors to the Shahnaz parlour. Roy who works in the client servicing section of an international advertising agency pointed out that in metros like Mumbai where there is cut-throat competition in every sector, it is a must for a man to be well groomed in order to be successful. "Being well groomed gives me the cutting edge. I'm sure my clients don't like to interact with a salesperson who has dirty nails or smells awful. Besides, my hectic schedule leaves me little time for relaxation or grooming myself. Hence a visit to the parlour is a must," he said.

For professionals like Bipin and Roy, hailing from middle-class families but holding plush jobs, shelling out Rs. 1,000 to Rs. 1,500 a month for the beauty regime is "money well spent." For the likes of actors and models, operating in an industry where looking good is mandatory, the monthly expenditure is often as high as Rs 4,000. "The John Wayne era of tough, hard-looking lover is gone. The new age women prefer men who are not only well dressed but well groomed. To keep with the times, manicures have become a bare necessity for them.

Grooming, a must for Men

Beauty treatments have always been a must for male actors and models. What is interesting is that in the past few years it has become a regular part of the regime of the middle-class office goers. Even in the so-called conservative metros, most young working men now visit a parlour and not the para saloon for a shave or haircut. The barber for them is now a stylish and more and more of them are experimenting with hair colours or dyes.

Thus, the wedding season sees the bookings in the men's section getting almost as high as in the women's section. The new age bridegroom is worried about the smallest blemish in his face and is keen to find just the right concealer to hide it. It is also a common practice for a bridegroom to have a manicure or even bleach his ring finger before the ring ceremony. The usual trend, however, is to go for the bridegroom package that comes at a moderate rate of Rs. 1,500 or so which includes shaving, manicure, pedicure, a facial and a face bleach.

Weddings and traditions go together and so, changes in wedding attire tend to filter in gradually. Yet, the seeds of change are evident. If ages ago, the bride walked down the aisle with a shy smile, draped luxuriously in a heavily brocaded Kancheepuram sari, today's bride is a bold woman with a wide range of outfits to choose from that includes custom-tailored wedding collections.

In the bygone days, the only choice that the bride had was regarding the colour of the sari. But today the scenario is different. The present wedding collections include not only saris but also a variety of ghagras, lehengas, gowns and designer outfits. Besides, the youngsters are also very much particular about what they would choose to wear on their wedding day. Today, the bride and the groom know that they have to look their best, what with the photographers and video cameras clicking away, to capture and preserve their every look, expression and mood!

There are beauticians to ensure that the make-up coordinates with the bridal ensemble. However, it is the "no make-up" look or the natural look that is the current trend these days. Besides, the make-up for the day of the wedding has to go with the sari and the jewellery.

For the other functions before the wedding and for the reception, the brides-to-be are willing to experiment with colour, contemporary hairstyles and designer outfits. However, most of them prefer to play it safe and be conventional on their wedding day. Gold is used mainly as part of the eye makeup, glitter for functions in the evening and also for Christian weddings where the predominant colour is white. If the jewellery comprises diamonds, then silver is the look. The natural look is very much in. For Christian weddings, silver is the colour, while for Hindus, it is the traditional golden look that is in. The make-up for the bride is decided on the basis of the colour of the sari and the jewellery.

The sari blouse is making waves in the fashion circuit and wardrobes of Kerala women The choli or the blouse is back in the news again, and this time for all the right reasons. And it is not a song, but the blouse (that goes with the sari) that is back in a re-invented avatar or rather many avatars.

It is said of fashion that it is cyclical, that nothing really goes out of fashion. Right from the heavily embroidered ones to short puff sleeves to closed neck to backless and even halter necks and bustiers, they are all back. As far as blouses go, all past fashions and some new ones are in vogue all at once. In fact, designers and boutique owners take orders for blouses.

"I once had an NRI client who came to me directly with a printout of a blouse that she wanted to be replicated. I assured her that I could do something similar, and I did. There is a renewed interest in the blouse, and the accent is embellishing it with embroidery and so on," says Sheela James of Czarina.

Avers another designer Shanti Ram, "At times what happens is that a sari may be understated, and then the best way to dress up a sari is with the blouse, do any kind of surface embellishment and it changes the way a sari looks."

The style and work on the blouses, however very in fact to a great extent, it is the sari that decides the work and the cut of a blouse. For instance, for light silks such as crepes, chiffons and georgettes, the embroidery tends to be light and the blouse makes up for the saris' understated effect. It is not limited to just the sari's blouse, even blouses for set-mundu are heavily embroidered.

In terms of designs on the blouses, the options are plenty -embroidery, sequins, crystals, Kundan stones, zardosi, aari, thread work... the list is endless. The popular fabrics, however, are either light like crepe, georgette, chiffon or cotton silks. Heavier fabrics such as silks or velvets are generally a no-no. But there are women who still like brocade blouses. As far as the embroidery goes, it is either tonal to complement the sari or contrast to set off the sari. That is not to say that everyone is as sporty as Mandira Bedi when it comes to blouses or cholis. The trend in Kerala at least leans towards the conservative. "Deep neck blouses are quite popular but backless? No way. Women in Kerala do not go that far as far as necklines go," says Gopika.