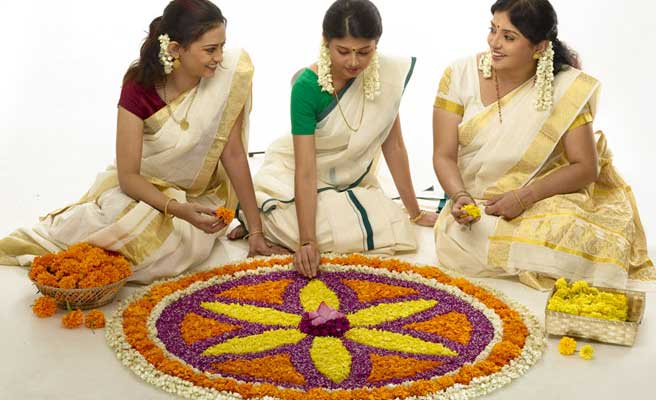 Once upon a time, there was a golden era of royalty during the asura king Mahabali’s times when virtue ruled, and truth, peace, and prosperity were a way of life with the people. ONAM, the state festival of Kerala, is celebrated as a colorful and vibrant festival with gaiety and enthusiasm all over the state by people of all castes, creeds, and communities. The festival symbolizes the return of the spirit of the king who once ruled the state in glory and is held as a tribute to his great sacrifice.

Onam is the harbinger of joy, cheer, and goodwill in abundance, heralding a bright new season after the incessant monsoon showers. It is ushered in by the chirping birds, fluttering butterflies and multi-hued blossoms that dot the landscape of God’s own country. It is a time when the ripe harvests are reaped, the grass is a fresh green, and the lakes, lagoons, and rivers are in full flow.

The harvest festival is celebrated in traditional fervor for ten days at the beginning of the month of Chingam which is the first month of the Malayalam calendar. The first day of Aththam and the tenth day of Thiruvonam are special occasions. The faithful and the devout throng the premises of varied places of worship to offer their prayers on the auspicious occasion. Greetings are exchanged between families and friends.

The festival is marked by a variety of merrymaking events and functions that include colorful pookkalams, sumptuous sadyas, lively folk songs, elegant classical dances, energetic sports and games, dynamic vallamkalis, and other public festivities. Onam beautifully showcases the state’s rich history, tradition, art forms, and culture. Preparations begin months in advance and literary and cultural activities and competitions are held all over in connection with the festival.

The grand occasion of Thiruvonam culminates in the elaborate feast called Onasadya, a nine-course meal served on banana leaves, consisting of boiled rice, sambar, rasam, kalan, erisseri, pulissery, koottukari, pachadi, kichadi, avial, olan and thoran – topped with black and white pradhans. The assortment of pickles such as puli inji, narangakkari, nellikka and kadumanga besides sweet and sour banana chips are a highlight.

Another enchanting feature of Onam festival is the Vallamkali or the Snake Boat Race held on the river Pampa. The decorated chundan vallams carrying hundreds of oarsmen paddling away in vigour amidst a cheering and chanting crowd is a spectacle worth beholding. Throughout the Onam season, the state can be seen bustling with activities, and everyone is in holiday mood enjoying family reunions, shopping sprees and food meals. Sounds of fun and merriment reverberate in the air, with people shopping for dresses, gifts, and jewellery, youth engaging in merrymaking and a long vacation for offices and educational institutions.

Kerala Tourism Department celebrates Onam festival at the state level every year with due pomp and splendor. Traditional classic and folk art forms, sports and games fetes, and colorful raleighs are presented in public places before an eager audience. As part of Onam celebrations, KTDC plans and organizes ‘Tourist Week’ that includes road shows, exhibitions, and stage performances, to give a boost to national and international tourism aimed at increasing tourist traffic to Kerala.

In short, Onam epitomizes Kerala at its best. For details on other festivals of Kerala, click keralafestivals