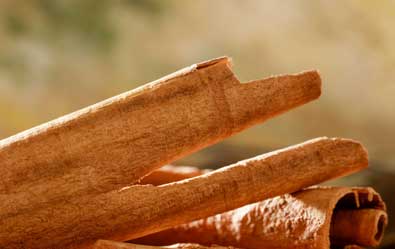 Cinnamon: an essential ingredient of the spicy Kerala cooking.

Cinnamon is the dried inner stem bark of Cinnamomum Verum. Cinnamon (Cinnamomum verum} is a bushy evergreen tree 10-15 m tall, belonging to the family Lauraceae. It is grown in Kerala and other tropical regions of the world including Sri Lanka. The bark is widely used as a spice. The leaves are ovate-oblong in shape, 7-18 cm long. They are leathery and shining green on upper surface when mature. The flowers have a greenish colour and a rather disagreeable odour. The fruit is a dark purple one-seeded berry containing a single seed.

The spice is light brown in colour and has a delicately fragrant aroma and warm, sweet flavour. It is lighter in colour and milder in flavour than the other related species. Cinnamon was once more valuable than gold and has been associated with ancient rituals of sacrifice or pleasure.

It originated in the central hills of Sri Lanka. In India, it is widely grown in one or two locations in Kerala. Cinnamon is a hardy plant and is cultivated in Sri Lanka under varying conditions ranging from semi-dried to wet zone conditions. It prefers shelter and moderate rainfalls without extremes in temperature. The ideal temperature for growing cinnamon is between 20-30 degree C and rainfall between 1250 to 2500 mm. Cinnamomum Verum is mostly cultivated in Sri Lanka, the Malagasy Republic and Seychelles. They are cultivated as low bushes to ease the harvesting process Eight to ten lateral branches grow on each bush and after three years they are harvested.

Cinnamon bark is a popular spice with a delicate fragrance and a warm agreeable taste... The brown coloured bark is easily chewable It is used in the form of small pieces or powder. It gives a dish a very rich flavour Cinnamon is an essential ingredient of the very different and spicy Kerala cooking. It is used to flavour a variety of foods, from confections to curries; The stick cinnamon is added whole to casseroles, rice dishes, mulled wines and punches, and to syrups for poaching fruit. The chips are also used in tea infusions or spiced cider blends. Ground cinnamon is used in baked goods like cakes, pastries and biscuits. Cinnamon leaf oil is used in processed meats, condiments and also in bakery items. It is being largely used in the preparation of some kinds of desserts, chocolate and spicy candies and liqueurs. In the Middle East, it is often used in savoury dishes of chicken and lamb.
In America, cinnamon and sugar are often used to flavour cereals and fruits, especially apples. It can also be used in pickling. Cinnamon is high in antioxidant activity. The essential oil of cinnamon also has antimicrobial properties. This property may allow cinnamon to extend the shelf life of foods.

The commercial products of cinnamon are quills, quillings, featherings, chips, cinnamon bark oil and cinnamon leaf oil... The bark is usually stored in the shape of a roll or quill, to ensure its aroma is retained. The dry quills or bark are packed in bundles for trade. ‘Quills’ are scraped peel of the inner bark of the mature cinnamon shoots, joined together with overlapping tubes, the hollow of which has been filled with smaller pieces of cinnamon peels which is dried first in the sun and thereafter in the shade. ‘Quillings’ are broken pieces and splits of all grades of cinnamon quills. ‘Featherings’ are feather like pieces of inner bark consisting of shavings and small pieces of bark left over. Cinnamon ‘chips’ are rough unpeelable barks scraped off from the thicker stems. Cinnamon leaf and bark oil are obtained by distilling the leaf and bark separately. The cinnamon bark oil has anti-fungal properties and cinnamon leaf oil is widely used in perfumery and cosmetics.It is also used in flavouring confectionary, liquors and pharmaceuticals.

In medicine, it acts like other volatile oils and once had a reputation as a cure for colds. Cinnamon is a stimulant, astringent and carminative, used as an antidote for diarrhoea and other problems of the digestive system. It has astringent; stimulant and carminative properties and can check nausea and vomiting. It is also found to help diabetics in the digestion of sugar.