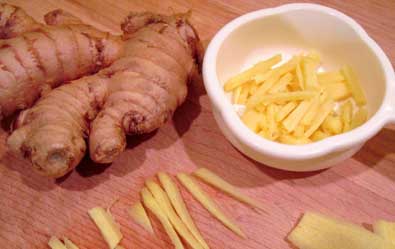 The most important and valued spices.

Ginger root is used extensively as a spice in many if not most cuisines of the world. (Zingiber officinale-biological name). The active constituent of fresh ginger is gingerol. When ginger is dried, the gingerol molecules are converted into the much more pungent shogaols. Cooking ginger transforms gingerol into zingerone, which is less pungent and has a spicy-sweet aroma.

Culinary uses
They are often pickled in vinegar or just cooked as an ingredient in many dishes.

The juice from old ginger roots is extremely potent and is often used as a spice to cover up other strong odors and flavors such as in seafood and mutton. Ginger is also made into candy, is used as a flavoring for cookies, biscuits, and cake, and is the main flavor in ginger ale, a sweet, carbonated, non-alcoholic beverage.

Ginger has a sialagogue action, stimulating the production of saliva.

It is an effective treatment for nausea caused by motion sickness, morning sickness or other illness. Ginger root also contains many antioxidants. Powdered dried ginger root is made into pills for medicinal use. Ginger ale and ginger beer have been recommended as "stomach settlers" for generations in countries where the beverages are made. Ginger water was commonly used to avoid heat cramps.

Ginger is grown throughout the tropical areas of the world. The most expensive and highest quality varieties generally come from Australia, South India, and Jamaica, while most mass market ginger is grown in China.