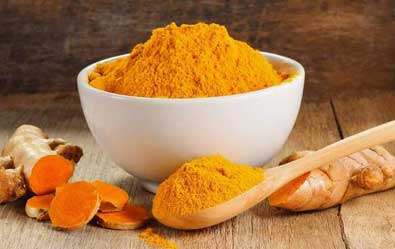 A spice in Cookery and a cleanser of the body

Turmeric is botanically known as Curcuma longa, derived from the old Arabic name for the kurkum plant. This spice is a member of the ginger family and unrelated to saffron. Like ginger, it is the root of the turmeric plant that is used as a spice, usually in a dried form.

Culinary uses
The root is generally peeled to expose its bright yellow flesh, then boiled, dried, and ground into a powder. Turmeric gives ball-park yellow mustard its bright colour, is a prime ingredient in Worcestershire sauce and is also used to colour other foods such as butter, cheese, and fruit drinks. It is a favourite in the Middle East and Asian foods and spice blends such as curry.

It is an amazing healing plant that has not only been valued for its therapeutic properties in Ayurvedic and Chinese medicine for thousands of years but also has a significant role to play in the prevention and treatment of a wide range of modern day problems. It is an excellent natural antibiotic, and one of the best detoxifying herbs by virtue of its beneficial effect on the liver, a powerful antioxidant with health-promoting effects on the cardiovascular, skeletal and digestive systems.

Beneficial Properties
Turmeric has powerful antioxidant properties, is reported to protect against the development of cancer, and has a long history of use in the treatment of various cancers; enhancing the production of cancer-fighting cells,6,7 protecting against environmental toxins, with an immune-enhancing effect and powerful antibacterial properties. Turmeric has long been popular as a remedy for treating respiratory infections such as colds, sore throats, coughs and fevers, skin problems such as acne and psoriasis, and kidney and bladder problems. It can successfully inhibit infection whether bacterial, viral or fungal.

The usual daily dose of turmeric is ¼-½ (one quarter to one half) a teaspoon of the powder two to three times daily between meals.

To make the tea, place ½ (one half) a teaspoon of powder in a small pot, pour over a cup of boiling water, leave to infuse for five minutes, then strain. You can add ginger or cardamom to add more flavour. Powdered turmeric mixed with water or Aloe vera gel can be made into a paste and applied to insect bites, spots and pimples, inflamed and infected skin problems including scabies and fungal infestation, and infected wounds.

Mixed with honey or Aloe vera gel, it has been used traditionally to treat sprains, strains and bruises. A little powder stirred into warm water makes an excellent mouthwash to treat inflamed gums and relieve a toothache.

Turmeric cooking tips and usage
• Turmeric is also known as Indian saffron.
• Turmeric is an important ingredient in curry mixes, chutney, and mustard pickles. It also goes well with chicken, duck, turkey, vegetables, rice, and salad dressing.
• Turmeric is extremely pungent, and actually gets stronger when cooked. A little goes a long way, so use it sparingly when experimenting.
• Avoid touching your clothing when working with turmeric. It is a powerful yellow dye.
• Although a pinch of turmeric may be used as a substitute for saffron to achieve that golden yellow colour, the flavour does not compare in the least.
• Substitute 1 teaspoon dry mustard for 1 teaspoon of turmeric.
• The colour of turmeric can vary widely from deep yellow-orange to bright yellow. This is simply due to different varieties.