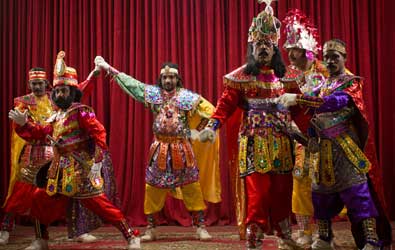 A Christian dance drama developed exclusively in Kerala as a counterpart of Kathakali enacted in Hindu temples. Unlike other performing arts, this drama is presented on a raised platform made of planks spread on skeleton wood structure. Actors don in colourful Roman attires enacts stories from Bible with rich dialogues and songs to the accompaniment of beating of country drums. The predominant feature of this art is the artistes stamping (Chavittu) the dance floor producing resonant sounds to accentuate the dramatic situations.

A classical art form originated in the Ernakulam District of Kerala State during the 16th Century AD, Gothuruth is believed to be the birthplace of Chavittu Nadakam. Since many number of celebrations and cultural programmes took place in Gothuruth, the island is now known as the‘Island of Festivals’. The artists wear extremely attractive make-up and elaborate costumes, and use detailed gestures and well defined body movements in tune with the playback music. It has a high resemblance to European Opera. Since its European character in its music and costumes, Chavittu Nadakam is believed to be originated after the arrival of the Portuguese to the shores of Kerala. As mentioned earlier, Chavittu Nadakam means ‘Stamping Drama’and as the name suggests, great stress is laid on the steps which goes along with the music. The actors perform and sing by themselves and was performed in open stages earlier, which is replaced by indoor stages nowadays. The play is considered a success if the stage collapses at the end of the play.