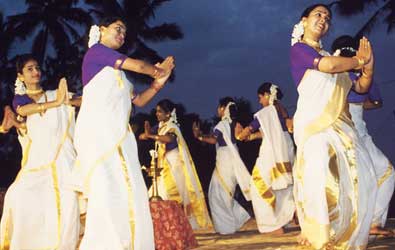 This is a group dance by young ladies of Nair community on the night of Thiruvathira (the sixth lunar asterism) of the month of Dhanu in the Malayalam calendar, corresponding to December in Christian era, till dawn, singing in praise of Lord Shiva. For married women it is an imperative ritual propitiating the God for granting lingering matrimony and for virgin maids, it is for the boon of getting a pleasing matrimonial alliance. Attired in traditional white handloom Mundu and Neryath and adorning fabulous gold jewellery, women dance around the Nilavilakku (pedestal wick lamp) placed in the courtyard, singing and clapping hands. It has songs written specifically for the purpose in special metric scale, narrating stories from the legends.

Thiruvathira, according to Malayalam calender, is the“nakshatra”or star of Lord Siva and according to the Hindu Myths, this day is believed to be the day on which Goddess Parvati met Lord Siva after her long penance and Lord Siva took her as an equal partner. Other than the Nair community, the festival is of great importance among the Kshatriya and Nambuthiri communities as well. It is celebrated just like the festival of Onam and Vishu. Poothiruvathira is the name for the first thiruvathira of a married woman. Fasting is an important part of this festival and the women restrain themselves from having rice-based food. Instead, they go for broken wheat and Thiruvathira Puzhukku, a mixture of colocasia, yam, Chinese potato, sweet potato, long beans, long plantain fruit and coconut. The desert comprises of koova payasam made of arrow root powder, jaggery and coconut milk. Thiruvathira spreads the message of joy and happiness among each other.