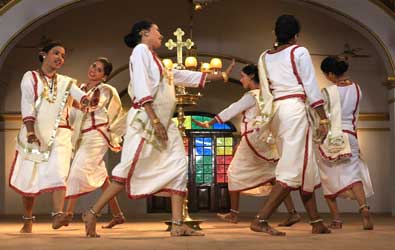 It is a counterpart of Thiruvathira Kali played by women belonging to the Christian community. Here also the dancers attired in traditional white mundu frilled at the back to cover the buttocks, Chatta (Jacket), rich jewellery including Mekkamothiram (an ornamental ring worn by the Christian ladies on the upper lobe of the ear, now considered old-fashioned). The dancers sing in praise of Jesus Christ to the varying rhythms of drum beating. It is comparatively brisk in action.The word “margam” refers to path in Malayalam and according to religious beliefs it means the path of salvation. The songs used for the performance of MargamKali is a description of the arrival of St. Thomas in Malabar and the different stanzas of the songs mention the miracles he performed, the churches and crosses he put up in different places etc. From the beginning of its performance till now, there has been different phases in the history of Margamkali. In the first phase this art form was performed by the Saint Thomas Christians during special occasions, Parachimuttukali (The Sword and Shield Dance) being a part of it. This native form was later suppressed by the council that laid rules and regulations for the ancient Saint Thomas Christians, called Synod of Diamper. During the seventeenth century, Itti Thoman Kathanar, a Knanaya Priest put his efforts to bring up this long gone native art form and was successful in uplifting its textual form. It is believed that it during this period, the Margamkali was edited and refashioned into the fourteen stanza structure which is present till now. However, the art form became popular only during the end of the nineteenth century and the beginning of the twentieth century with the intervention of great masters like Kalarikal Unni Ashan, Indumoottil Kocheppu Ashan, Indumoottil Kutto Ashan etc . Later on, Margamkali had an important position in Christian marriages and in school and college Kalolsavams, till date.