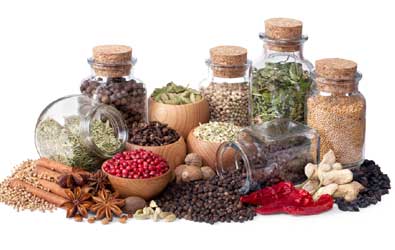 The story of Kerala's spices dates back to many thousands of years into the past. Kerala's claim to fame in the ancient world rested mainly with her fabulous riches brought about due to the total monopoly over spices. The ancient port of Musiris was the center of the world trade many eons ago - the spice trade being central to its legendary fame. It can be said that the Western colonization itself a fallout of the race to control the spice trade from Kerala. Vasco Da Gama's arrival was just the culmination of the western world's rush to find the sea route to the Indies and its spices trade.

Within the last decade, the international trade in spices has grown to an estimated 500,000 tonnes of spices and herbs valued at more than 1500 million US dollars. It is a matter of pride for the tiny state of Kerala that the bulk of this trade is still from Kerala. Some spices that have made Kerala a household word in the spices world are listed below.