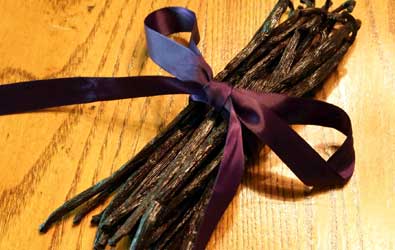 Vanilla is affected by many serious diseases in India, affecting various parts of the vine.

Fusarium wilt
Fusarium wilt caused by F. oxysporum is the most serious disease of vanilla. The disease is more prevalent in younger plantations especially during the monsoon season. The infection starts at the leaf axil and spreads to the inter nodal region resulting in rotting and drying of the stem above the point of infection. The fungus also causes leaf rot on the plant. Phytosanitation such as removal and destruction of dead and diseased tissues and provision of adequate drainage in the plantation is important. Spraying and drenching carbendazim 0.1% is effective against the disease. Addition of organics which encourage growth of antagonistic microflora also reduces the intensity of the disease in the plantation.

Phytophthora rot
Phytophthora meadii causes rotting of beans, leaves and stems. In severe cases all the beans in a bunch are completely rotten. The disease is more severe during the monsoon especially in shaded plantations and poorly drained soils. Phytosanitation and spraying of Bordeaux mixture 1% and drenching of soil with copper oxychloride 0.2% is effective against the disease.

Root rot
Root rot caused by Sclerotium rolfsii is generally seen during the onset of monsoon rains. Initially, rotting of root tips occur and later the rotting extends to the whole root system followed by yellowing and wilting of vines. In severe cases the vine may also die. Drenching of affected vines with carbendazim 0.1% is effective for the management of the disease.

Shoot tip rot
The disease which is characterized by rotting of shoot tips is caused by Colletotricum vanillae and is more common during monsoon season. Drenching of affected vines with carbendazin 0.1% is effective against this disease.

Sclerotium rot
The disease affects leaves and beans and is caused by Sclerotium rolfsii. The beans develop reddish brown sunken lesions initially and later the entire bean rots. In severe cases all the beans in the bunch are covered with a thick white feathery fungal mat. Spraying carbendazim 0.1% is effective for control of the disease.

Dry rot
Dry rot affects all parts of the plant and shrivelling of stems, roots and leaves followed by yellowing are the common symptoms. Though the disease occurs throughout the year, it is more severe during summer. Intermittent drying of stems and leaves occur at advanced stages of the disease. Fusarium sp. and Rhizoctonia sp. are associated with the disease.

Snails
Snails and slugs feed and damage tender shoot tips and leaves especially in moist and shaded areas in the plantations. Hand-picking and poison baiting helps in preventing the pest infestation.

Harvesting
The beans or pods are ready for harvest 6-9 months after flowering. The beans can be considered as mature when they change from green to pale yellow. At this time, the pods may be 12-25 cm long. It is essential to harvest the pods at the right stage, as immature pods produce an inferior product and over-mature pods split during curing. The right picking stage is when the distal end of the pod turns yellow and fine yellow streaks appear on the pods. Daily picking of mature pods is essential. The pods can be harvested by cutting with a knife. A good vanillery yields 300-600 kg of cured beans per hectare per year. About 6 kg of green pods produce 1 kg of cured beans. The yield of the vine declines after 12-14 years.

Curing
Green vanilla beans (pods) contain little vanillin and is odourless and flavourless. It is during curing that the beans undergo enzymatic reaction responsible for the characteristic aroma and flavour of vanilla. Curing should preferably begin immediately after harvesting, but the beans can be stored for 3-5 days. There are different methods of curing but they all consist of more or less four stages.
1. Killing the beans to allow the onset of enzymatic action.
2. Sweating, for raising the temperature to promote enzymatic action and enhance rapid drying for preventing fermentation.
3. Slow drying for development of fragrance.
4. Conditioning the product by storing for a few months in closed boxes.

The important methods of curing vanilla are Mexican Process, Bourbon Process, Peruvian Process and Guiana Process. In the Mexican process, killing is done by exposing the harvested beans directly to the sun for about 5 hours, which produces the optimum percentage of vanillin content. In Bourbon process, bamboo baskets with the beans are immersed in hot water (63-65°C) for 3 minutes. After rapidly draining the water when the beans are still hot, they are kept in wooden boxes lined with blankets. The beans acquire chocolate brown colour the following day. They are then spread in the sun on dark colour cotton covers for 3-4 hours and later rolled up to retain the heat and stored in wooden boxes. This process is repeated for 6 to 8 days, during which the beans lose some weight and become very supple. Later the beans are dried by spreading them out in wooden trays under shade in an airy location. The duration of drying varies according to the size of the beans and usually lasts for 15-20 days. Properly dried beans are kept in closed containers where the fragrance is fully developed. Finally they are graded according to size and kept in iron boxes lined with paraffin paper. Care should be taken in the early stages of drying to keep the beans straight, because curved beans are considered as inferior in quality. When properly cured and sun dried the vanilla beans will be almost black and supple enough to be bent without breaking and vanillin crystallizes over the beans. Properly cured vanilla beans contain about 2.5% vanillin.

Vanillism
Vanillism, an occupation hazard is caused by poisoning due to vanillin. Vanillism is characterized by headache, gastric trouble and rashes over the body. The sap of vanilla plant can also cause severe allergic reactions such as itching, skin rashes and inflammation.

Vanilla Magic
Much more than just an ingredient in baked goods, vanilla is a magical flavoring and can do wonders for most foods and beverages. It's also very useful in calming our minds and bodies and helping us to feel good. Here are some thoughts and suggestions for making use of vanilla's magic. For instance, did you know that vanilla is...an antacid?
Add a few drops to pineapple, fruit salads, or sauces containing citrus, to soften the sharpness and give it extra sweetening. Put a little vanilla in tomato sauces to neutralize the acidity.

A lifter and enhancer?
Add vanilla to give new "life" to flavorless seasonal fruits or other foods that need a flavor boost. Did you know that chocolate by itself tastes "flat" which is why it usually contains vanilla?

A natural sweetener?
Add a few drops of vanilla to vegetables, sweet potatoes, and salad dressings. It increases the natural sweetness of vegetables and provides a delicate, subtle flavor to salads.

An adjunct flavor for seafood, fowl, and meat?
Use with roasted, sautéed or barbequed meats, poultry, wild game or seafood. Split a vanilla bean and place it in a bottle of olive or other quality oils for sautéing meats, poultry, or seafood, or add a few drops of vanilla extract to cooked fish, fowl, or game as well as to sauces and marinades.

A stomach sedative?
Add pure vanilla extract to mineral water or apple juice to settle a nervous stomach. To soothe and please cranky, teething or sick children add a few drops of vanilla to their milk or juice. Away from home and need something quickly? Coca cola is filled with vanilla, and therefore used in many countries for calming an agitated stomach.

A natural calmative?
Place several vanilla beans in a bottle or jar. Use as aromatherapy to soothe jangled nerves. Sloane-Kettering and other medical facilities use the vanilla aroma to calm patients undergoing MRI and CAT scans.