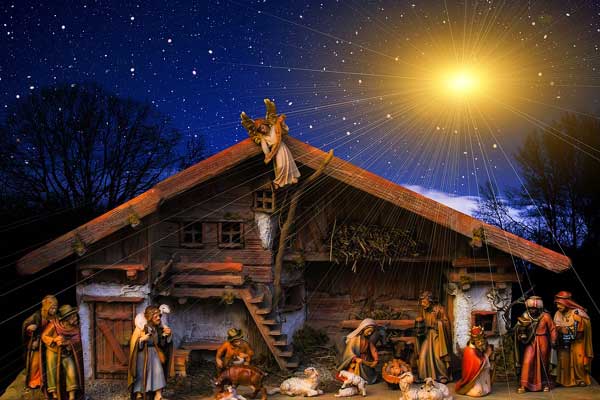 The festival of universal love is here again.Christmas, which is more than a festival is the solemn occasion to remember Jesus, his life and ultimate sacrifice and his message of compassion and brotherhood. The birth of Jesus Christ on December 25 each year sees a variety of customs and ceremonies.

To begin with there is the Christmas Star, the Christmas tree, the Crib, the Christmas cake, presents, and of course, Christmas Father.He is the star attraction for children and is quite a fascinating personage, who claims above all to be the very embodiment of the most vibrant and quintessence of the gayest of all the festivals. With the children allowed to occupy the central stage, in the enchanted company of Christmas Father, Christmas takes on the look of a festival of children.

Though the Christmas tree is a comparatively new addition to Christmas celebrations in Kerala, it is the twinkling Christmas star put up at Christian homes or shops which sets the tone for a season of cheerfulness and joy.

The crib is a miniature production of the stable where Jesus was born. It developed from the old practice of giving dramatic expression to the events and the surroundings of the birth of Christ.

In cathedrals and churches, the nativity of Jesus is enacted through miniature models. The hymn 'Gloria in exelcis Deo' is intoned admidst the explosion of crackers.Carols and songs developed from nativity plays are sung. Priests hold the Holy Mass in churches at midnight.

Before the Mass begins, an image of the child Jesus is brought out by the priest, preceded by children holding lighted candles that are placed in the crib. Hymns are sung and crackers are burst to signify the coming of Jesus Christ into the world.